The identical twins Aiman and Minal Khan made their entry into the showbiz industry together. Initially, it was hard for their fans to distinguish between them, but over time each has proved her talent for acting. The two have owned their status of celebrity and stay in the celeb news quite often. Case in point being ‘quite long wedding functions of Aiman.

Another time was when Minal Khan posted a picture on her Instagram with her celeb boyfriend (as their pictures have made obvious), and Pakistanis lost their cool.

Amongst the lectures on cultural values and religious values, Minal and Ahsan Mohsin Ikram had to hear lots of criticisms all over social media. Safe to say, most of them have still not approved of their relationship. But what do they care? If they are happy, then nothing else matters.

Anyway, Minal Khan took to Instagram sharing a picture of hers at Côte Rôtie, located in Alliance Francaise, Karachi. Sitting in the sun with a glass of orange juice, she captioned it, “Taking Vitamin C and vitamin D together.”

She looks absolutely dazzling in the sunlight. While her fans admired it, Ahsan Mohsin Ikram also commented. He said, “& most importantly vitamin A.”

Scientifically, you can get vitamin A from animals. They can be dairy products, fish, and meat. But obviously, Ahsan didn’t mean that. It was his way of being cheeky. In actuality, by A, he meant himself.

And Minal replied to him, saying, “carrying with me.”

Did that mean she was there with him? 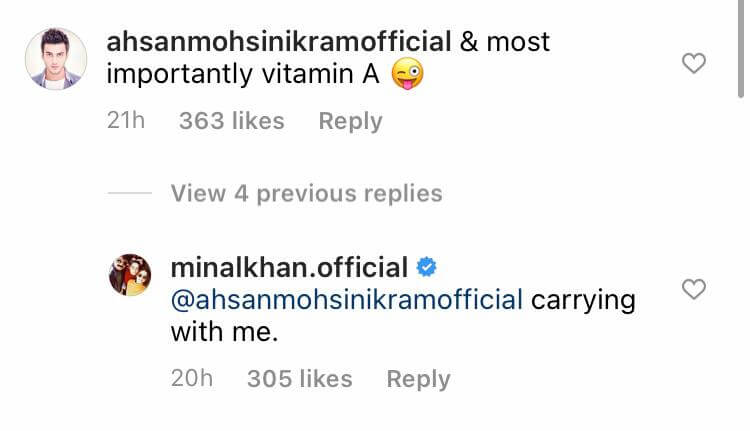 Pakistanis commenting on their conversation

But that’s not the point. The point is that Pakistanis were cringing at what they read.

We have a right to our opinion definitely. That said, we should also be cautious about what we say because we can hurt someone. And that’s never nice, is it?