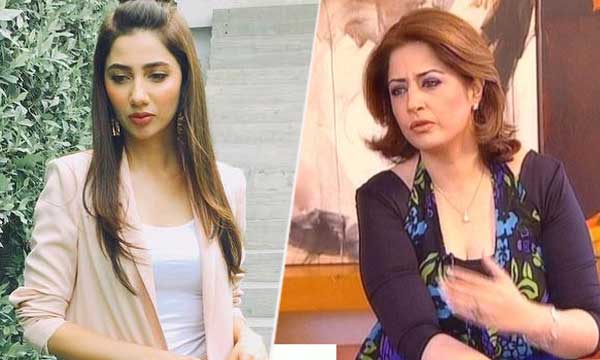 Mahira Khan was up and about in Dubai, promoting her dream debut Raees, starring Bollywood Badshah, Shah Rukh Khan! She has certainly stolen the spotlight in Pakistan’s media circuit and her fans are super excited for her upcoming Indian movie.

Apparently, the filmmakers have planned a solo spree of Raees’s promotions for MK.  Seems like she was sidelined on purpose and did not join SRK in Dubai to promote their mutual blockbuster!

The veteran television actress, Atiqa Odho was amongst the first to notice this and took to Instagram to protest regarding the matter!

I’m proud of how beautiful you look in all the Raees songs & promos but am upset that the producers are treating you like an untouchable and giving into pressure from extremist groups in India.

Read Odho’s full letter to Mahira in this post!

My Dearest Mahira, I just wish you had been included in the Dubai press meet and sat on the stage with SRK and the rest of the cast. Having encouraged you to try your luck in India, I'm proud of how beautiful you look in all the Raees songs & promos but am upset that the producers are treating you like an untouchable and giving into pressure from extremist groups in India. Artists should always stand united against terrorists in any country. I pray your movie is a big hit and you shine like the super star that you are. Your fellow artists in Pakistan stand by your side. Atiqa Odho #mahirakhan #raees #shahrukhkhan #indopakfilms #hipinpakistan #divamagazinepakistan #hellopakistan #upapakistan #actpakistan #actors

What is more, Atiqa also gave an interview to Dawn and expressed her remorse on how both Fawad and Mahira have been barred from working in Bollywood!

It is apparent that Atiqa Odho is quite concerned for both the Pakistani Khans, whom she starred with in the record-breaking drama, Humsafar!