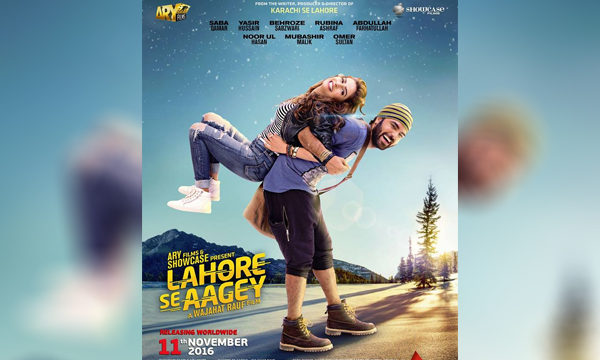 Saba Qamar’s upcoming Pakistani movie Lahore Se Aagey is all set to release on 11th November 2016. The film has just unveiled its new look with a rocking poster! This time around, ARY Films have teamed up with The Showcase Films for Lahore Se Aagey. The tale is being directed by Wajahat Rauf with Yasir Hussain as the writer.

The sequel to 2015 Pakistani movie Karachi Se Lahore, Lahore Se Aagey gave us a peek of the sizzling starlet Saba Qamar and the hunk, Yasir Hussain in the teaser. Seems like the leading couple is all set to take the viewers on a fun, rollercoaster ride from Lahore and beyond!

Check out the teaser of Lahore Se Aagey here.

For those who don’t know, Saba Qamar will play the role of a rock star in the film. The plot of the Lahore Sey Aagey revolves around Yasir Hussain, Moti this time. He will meet the actress on his way to Northern areas from Lahore. The journey in the movie will unleash plenty of humorous and giggling moments like in its prequel!

While the promo doesn’t reveal much, let’ see what Lahore Se Aagey has to offer!