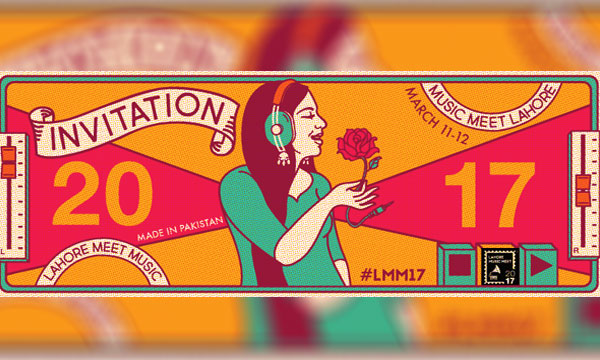 Music Meet, the powerhouse team behind Pakistan’s First Ever Music Symposium, is all set to stage the third edition of The Lahore Music Meet [#LMM17] at the Alhamra Art Centerin Lahore on the 11th and 12th March 2017.

The two-day festival is dedicated to bringing together musical minds from across Pakistan for a celebration and critique of music and will feature some of the country’s leading music artists such as Sajjad Ali, Ali Azmat, Meesha Shafi, Momina Mustehsan, Arshad Mahmud, Haniya Aslam and Javed Bashir to name a few.

Indeed, #LMM17 aims to bring together enthusiasts, artisans, artists, patrons, industry representatives and academics to initiate dialogue on the developments in music and their shortcomings. Speaking about the third edition of Lahore Music Meet, festival directors Natasha Noorani and Zahra Paracha have said;

“We feel like we’ve successfully managed to get a collection of artists, to speak and perform, who capture some of the major soundscapes in Pakistan today.”

The Lahore Music Meet team have set up a series of panel discussions and masterclasses featuring a variety of topics on music such as; ‘Presenting the Presenters’, ‘Composing Hits: From PTV to Pakistani Pop’, ‘Heritage & Archiving: Preserving Music in Pakistan’, ‘Score for a Film’, ‘Art Sound & Space’, ‘Patari Tabeer’, ‘Women On The Scene’, ‘Storytelling through Dance’, ‘Talking Tablas & Beats’ and ‘The Composers Guide to Big Screen’ along with workshops and storytelling sessions with multi-talent personalities representing all aspects of our music industry.

The two-day event is open to the general public with no cost of admission and will be headlined by award-winning artist Slowspin and indie singer-songwriter Ali Suhail on day-1 with Pakistan’s leading indie band Poor Rich Boy and classical music maestro Javed Bashir to performance on day-2 as part of the festival’s indoor showcase. The outdoor showcase will feature a diversity of artists who encapsulate various musical spectrums of Pakistan.

These include; Hathi, Abdulah Siddiqui, Ehlerock, Janoobi Khargosh, Kashmir, Jaubi, Keeray Makoray, TMPST, MU, Patari Tabeer, Saakin, Wooly and The Uke, Shajie, Shorbanoor, Wisdom Salad, Tonight Us, Noah’s Heark, Mehdi Maloof and Mohammad Aizaz. For its third iteration, the Lahore Music Meet received over 250 applications from across the country for the live performance sessions which were then shortlisted by co-founders Natasha Noorani and Zahra Paracha. 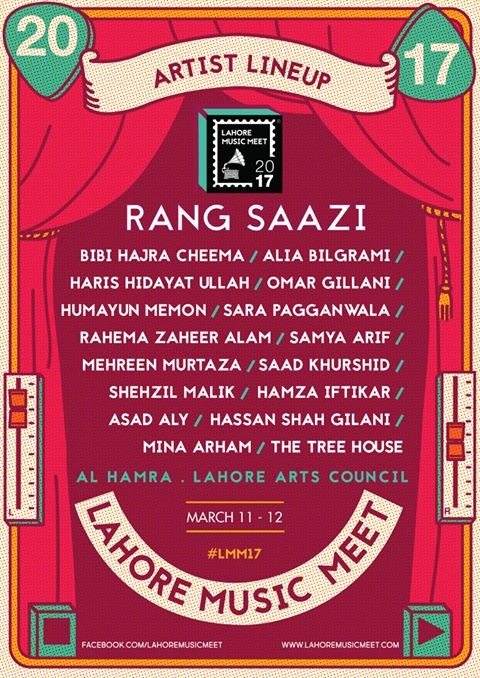 #LMM17 will also be hosting an audiovisual exhibition titled ‘Rang Saazi’. Co-curated by Alifiyah Imani and Azka Shahid, this curated showcase will feature contemporary visual artists who have broadly explored and interpreted music as a subject and subculture and its influence as an integral part of our collective, historical, and cultural identities.