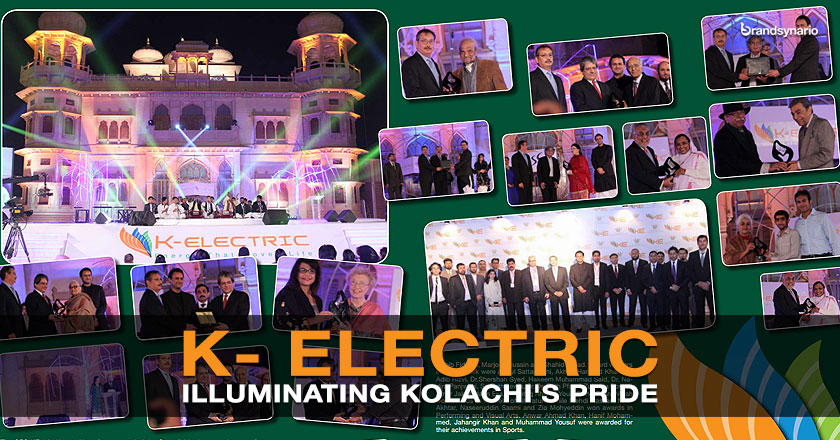 The ‘city of lights’ as Karachi is called, owes its magnificence and its metaphorical brightness to its folks; who include the founding parents of modern Karachi. They worked through encumbrances from rampant corruption, unwarranted censorship of intellectual discourse to propagation thriving in the face of weakened faith and growing mindlessness.

They toiled resiliently; using their ingenuity in the face of the ever-increasing madness delivering for life and passionately accounting to those responsibilities they have taken on themselves, envisioning and creating, sporting and achieving; chiseling their unique identities in the process.

K-Electric, the city’s electric power utility company since the past 100 years, honored 25 such individuals in a grand ceremony held at the historic Mohatta Palace.

Also, published at the occasion was the “KE Pride of Karachi Awards” which pays homage to the city and its pride.

Written by the eloquent Imran Aslam, the book starts off with a personal tribute to the history of Kolachi in it’s hey days of pre- and post-partition splendor.

He traces the birth of this thriving metropolis to the famed, Mai Kolachi, the (mythical?) founder of the city and narrates the landing of different races on the shores of Kolachi, the somewhat remaining effect of British bourgeois on the city, the pre-partition ownership commanded by the likes of Dayaram Jethmal (DJ), Nadirshaw Eduljee Dinshaw (NED) and other Hindus, Parsis and Christians alongside Muslims who wanted to see the city proper.

Imran has delved into the after effects of partition and the culture of the Indian Muslim inhabitants most of who came as refugees from riverside valleys, going on to describe how that evolved the Karachi society; its traditions and intellectual landscape.

The narrative is powerful enough to move the reader emotionally while pressing on any passionate Karachiite’s appetite to know more about the ever transitioning and shredded city that is now our home making one question; how could we allow a culture of loathing to prosper in such a happening city that always spread its arms to take all in?

On a lighter note, his recollection for points and places of the era gone by is enough to rouse any Karachiwala’s nostalgia.

It also brought to my mind Mehdi Zaheer’s poem written in the ‘50s, ‘Bandar Road Say Keamari’, sung by Ahmed Rushdi; creating an image of the old peaceful city and the well-ordered discipline that it was imagined with, which was allowed to die out as times progressed.

With a message of hope, the book progresses on to the five award categories and council members who nominated and chose the award winners. The first category, ‘Leaders, Visionaries & Social Change-makers’ was chaired by Dr. Abdul Bari Khan of Dow’s blood bank; Abdul Majid Bhatti, the senior journalist and sports correspondent; CPLC founder Jameel Yusuf; and the prolific and diverse Javed Jabbar. The next one, ‘Literature’, was manned by the famed journalist, Ghazi Salahuddin, and Asif Farrukhi the fiction writer, critic and translator.

Last but not the least, the ‘Sports’ category was advised by Salahuddin Mulla, the former test cricketer and Chief Selector for PCB; Samiullah Khan, Pakistan Hockey’s ‘Flying Horse’; Chishty Mujahid, the Cricket journalist and broadcaster; and Abdul Majid Bhatti.

The book presents the winners in its signature mesmerizing style, powerful enough to move the reader to take a bow to each.

The list moves on to Dr. Ruth Pfau, the German lady behind the Mary Adelaide Leprosy Centre; Sister Ruth Lewis, Dar-ul-Sukun’s angel; and Zubeida A. Dossal, the teaching methodology genius behind the Teacher’s Resource Centre.

Relentless wordsmiths and poets having the craft to pull the strings of any reader’s sensibilities; Amar Jaleel, the late Jon Elia, Mushtaq Ahmed Yousufi and Zehra Nigah follow the leaders and social change-makers.

Performers and visual artists include the phenomenal Moin Akhtar; followed by the entertainment maverick Zia Mohyeddin; the melodious and soothing Mehdi Hassan Khan and Ustaad Naseeruddin Sami of the classical Delhi Gharana. Architects, Arshad Abdulla and Habib Fida Ali are featured next along with the art conservationist and critic, Marjorie Husain; and sculptor, Shahid Sajjad.

Another worth reading aspect of the book is the message from the Chairman of K-Electric, Tabish Gauhar. While it does glorify the utility organization, considering the controversies surrounding it, the message is written in a down-to-earth tone of a missionary at work, which adds believability to Tabish’s claim of safeguarding long-term interests of Karachiites.

It also gives an insight into how an organization like K-Electric has a challenging role to play towards its ever-increasing stakeholders in an environment of decreasing investor confidence. Noting a part of his message, “Public service is a…thankless job by definition…”, I started thinking; if K-Electric could talk to us more, could tell us more about its dedication towards this city, may be educate us on why power breakdowns happen the way they happen and what all is needed to restore the ‘light’ back on; us Karachi wallas may see the method to the madness and be more forgiving for our times of darkness, don’t you think?