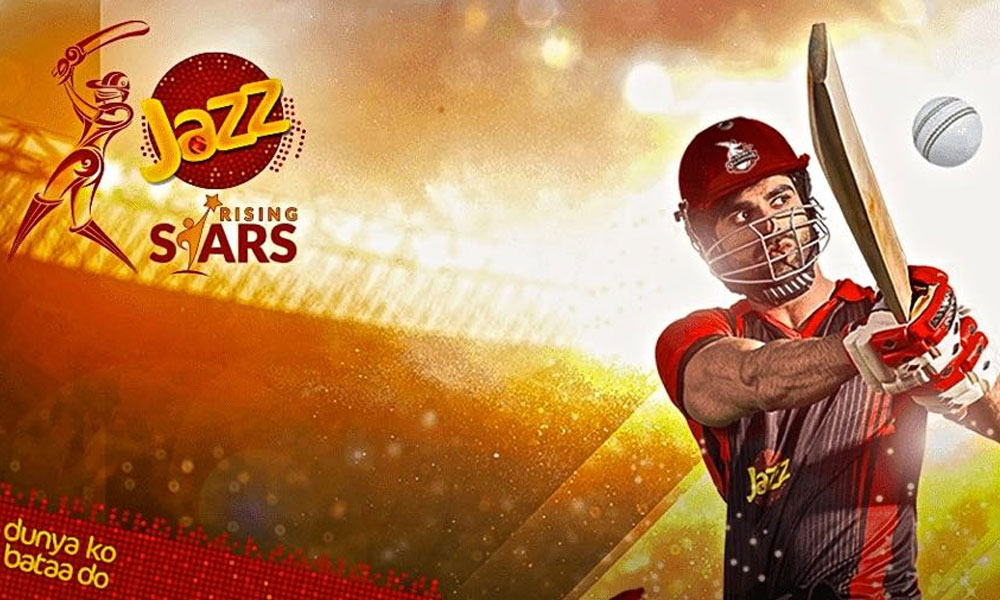 Lahore, 6th October, 2016: The Jazz Rising Stars T20 Cup, was organized with Lahore Qalandars and Jazz. It concluded with Faisalabad Rising Stars coming out on top as the winners of the tournament.

The tournament saw a total of eight teams participating divided into two groups. Each group comprised of four teams with 16 players each, where the top team from each group battled it out in the final.

The final was played between Lahore Rising Stars (LRS) and Faisalabad Rising Stars (FRS). Batting first, LRS could only manage a total of 44 in 11.5 overs. In reply, FRS managed to achieve the target in 7.3 overs with the loss of just a single wicket. 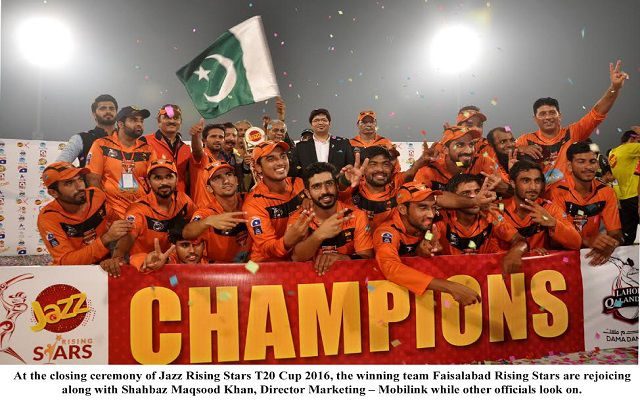 FRS were then handed over the trophy by Pakistan Cricket Board executive committee’s chairman Najam Sethi, and Shahbaz Maqsood Khan along with prize money worth PKR 200,000/- ; LRS walked away with PKR 100,000/-. LRS’ Usman Qadir and FRS’ Saad Ullah won the best bowler and batsman award, respectively, with a cash prize of PKR 50,000/- each.

Speaking about this initiative for the youth, Asif Aziz, CCO – Mobilink said: “The Jazz Rising Star T20 Cup is the first-ever talent hunt in the game of cricket held on such a magnitude across Punjab. Through this competition, not only have we found the most gifted players of the game, but Pakistanis have also witnessed some exciting cricket in the past few days.”

To ensure the young cricketers get the desired support throughout the tournament, entry to all the matches at Qaddafi Stadium was free of cost, while cash prizes of PKR 10,000 were given to spectators who were able to catch the cricket ball. Four lucky spectators also won brand new Jazz X handsets through a lucky draw.

Speaking at the tournament’s closing ceremony, Shahbaz Maqsood Khan, Director Marketing – Mobilink stated, “This has been a riveting journey for us all. First, more than 110,000 young players showed up at the selection camps run throughout Punjab, and then the tournament itself generated a lot of buzz amongst cricket enthusiasts throughout the country.”

“Since the re-launch of Jazz, our aim has been to facilitate nation’s youth in reaching their goals; may it be sports, education or their professional careers. Our partnership with Lahore Qalandars provided us an opportunity to ensure we shed light on young cricketers who have the mettle and skillset to become the next international stars. And after seeing some of the performances in this tournament, I am certain we shall be hearing a lot about certain players in the coming months and years.”

The entire selection procedure and the resulting tournament was part of Jazz Rising Stars – a one of its kind initiative aimed at finding hidden cricketing talent, provide them a platform to showcase their skills and equip them with the right resources to shine.

The move was made in line with Jazz’s ‘Dunya Ko Bataa Do’ – a pledge undertaken to provide the right platforms and opportunities to Pakistani youth for them to achieve success.

Apart from this, 30 short-listed players, chosen from the tournament itself, will be awarded a once in a lifetime opportunity to travel all the way to Australia to engage with and learn from the current reigning Big Bash League Champions, the Sydney Thunders.