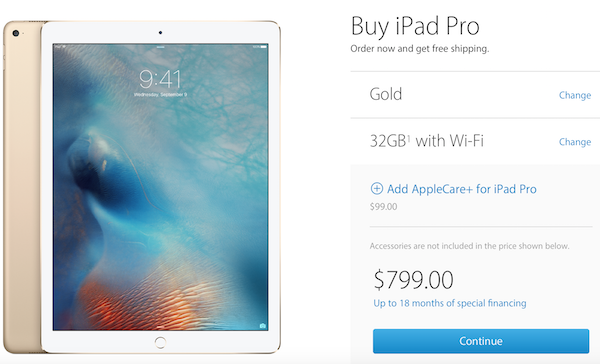 Apple iPad Pro is now officially on sale and is available for order on Apple’s online store.

iPad Pro was announced in September at the Apple media event alongside iPhone 6s & iPhone 6S Plus. The all new iPad features a striking Retina display measuring at 12.9 Inches and boasting a 2732 x 2048 screen resolution packing 264ppi.

The color options for the iPad Pro are Silver, Gold, & Space Grey. The iPad pro’s separately sold accessories include the all new Apple Pencil priced at $99 in the U.S & Smart Keyboard priced at $169.

The Fastest delivery date shown by Apple was November 13, Friday or November 16th, Monday (free) in the U.S.