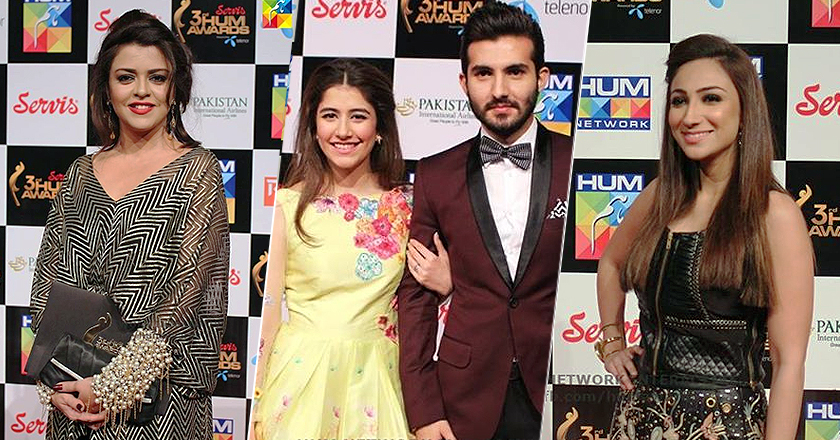 Pakistani glitterati flew out to Dubai World Trade Center last night on the 9th of April for one thing: Hum Awards 2015.

The red carpet was adorned with glamorous faces from all over, including Fawad Khan AKA Lollywood stud, the ‘It Couple’ Shehroz Sabzwari & Syra Yousuf, ‘Billi’ Mehwish Hayat, Saba Qamar, Humayun Saeed, Ahsan Khan, ‘Rocker’ Ahmed Ali Butt & others celebrating the best of the best in television, fashion and music, commemorating the prestigious night.

Steamy performances by Sajjal Ali, Ahsan Khan, Saba Qamar and Feroz Khan kept the audience amused, along with a special performance by Shehroz & Syra, while the event was hosted by heartthrob Hamza Ali Abbasi and Sanam Jung.

The big night was full of firsts for our beloved entertainment industry – Hum Awards took place outside of Pakistan and Indian singing legend Sunidhi Chauhan graced the event with a live performance.

Atiqa Odho, the Face of Hum Awards commented on the success of Pakistani dramas, “We are extremely brave when it comes to our content. We don’t show you just glamour. We will put up a mirror and show you reality.”

“Our Pakistani dramas have stayed honest to our culture and are close to reality.”

“Lots of people, even if they don’t live in Pakistan, feel a cultural connect. They feel that it could be a story of their homes … After all, our family values are the same.”

Actor Ahsan Khan added: “We believe in realistic acting and characters. Earlier there was not so much exposure for our serials, but with Hum Awards being held overseas it shows our growing popularity. It’s such a good sign.”

Here is the full list of winners of the Servis 3rd Hum Awards 2015:

Congratulations to all of the winners from us here at Team Brandsynario!

View the pictures from the star-studded night below: