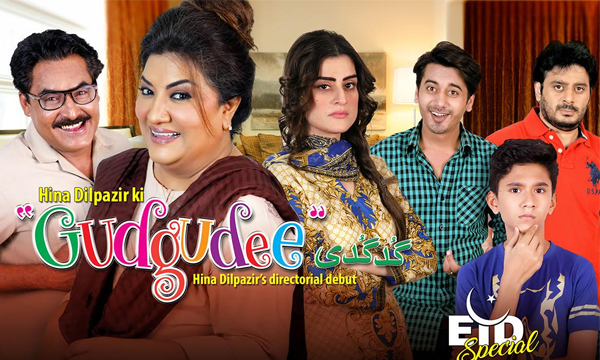 Hina Dilpazeer is on a roll in Pakistan’s entertainment industry. After the epic portrayal of variety of diverse roles on screen, the multifaceted actress  is ready to take a swipe at direction. S

he has stepped behind the camera to make her directorial debut with TV One Bakra-e-Eid special comedy play, Gudguddi.

The actress considers directional debut as a major leap in her career.

“It’s not an easy decision to take a plunge in direction but the team at TV One helped me a lot in this process – especially Seema Tahir Khan and Ishrat Sohail support have been phenomenal,” she said.

While revealing the storyline the actress said that it doesn’t only revolve around ‘qurbani ka janwar’ but it has a beautiful message embedded into it.

“Our story deals with human emotions and introduces the viewers to beautifully knitted family bonds that keep us united,” she added.

Besides direction, Hina DIlpazer has also acted in the drama serial and will be seen in an interesting role of Dolly Phuppo.

Written by Alina Farooqui, the drama stars Amna Malik, Rashid Farooqui, Salman, Basit Faryed and child star Samar. The play will air Day One and Day Two of Eid on TV One.

The drama is about a married couple Sara and Moeen and their lovely child Fahad. Keeping their egos tall, Farhad parents have a serious conflict between them which may lead to their separation.  Disturbed by this, their 12 year old son Fahad conspires with fun loving and naughty Dolly Phuppo to bring his parents together so they can celebrate Eid as a family.

Mani’s one-sided love for Dolly Phuppo adds more spice to the brew. With cheeky one-liners and comic situations this drama promises to be a joyful experience for viewers.