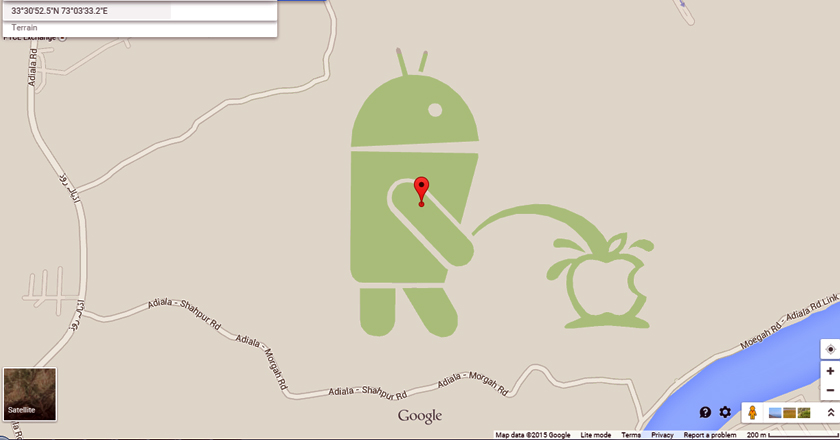 Google has disabled its Map Maker tool starting from today due to a recent prank incident for an unspecified time. The Google Map Maker tool is a tool that allows anyone using it to make changes to specific locations on the map and help make Google Maps more thorough and precise.

Last month, a location on the Google Map went viral when it was shown to contain a prank image of the Android mascot peeing on the Apple logo. A prankster had inserted this image to the location on the south of Rawalpindi, Pakistan.

Also another image located nearby the first one was spotted criticizing its review policy. Both images were taken down by Google Maps soon after the prank was spotted.

Users are now being notified that the map-making tool is no longer available. Google hasn’t specified for how long the tool will be out of service, but it confirmed the decision was the result of recent ‘attacks’.

Google stated that changes are being made to how content is moderated. To battle such problems in the past, the system worked on a combination of automated tools and user moderation to take out pranks or other inappropriate content.

The notification takes you to the Map Maker’s help forum to a post by Pavithra Kanakarajan, Google’s product manager for the service.

“The most recent incident was particularly troubling and unfortunate — a strong user in our community chose to go and create a large scale prank on the Map. As a consequence, we suspended auto-approval and user moderation across the globe, till we figured out ways to add more intelligent mechanisms to prevent such incidents.”

It’s not clear how long the tool will be disabled, but Kanakarajan noted “fixing some of this is actually going to take longer than a few days.” The formerly automated system was turned off and switched to a manual review process, meaning each edit is now individually reviewed by Google, which has caused a huge backlog in edits.