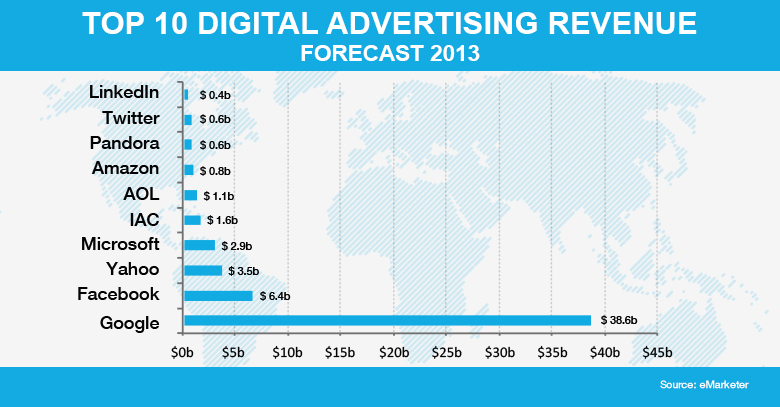 Google has proven to be almighty when it comes to online Advertisement. According to Mashable, total online ad spending accumulated to be around $117.6 billion in 2013, one-third of which was earned by the search giant Google.

Google tops the chart (from statista.com) which shows the top 10 destinations for online ad dollar spent. The colossal lead can be estimated by the fact that the Google earned twice as much as all the other nine companies made together.

The list further includes Facebook on the second position, followed by Yahoo on third and Microsoft on the fourth position, for online ad revenues.

For all the people who wondered how does Google – a brand which for the longest time was touted for ‘not having a product’ – earn? The fact, as the statistics illustrate, is that Google is doing pretty well.

Last year Google made around 97% of its total earning from online Ads.70% of this revenue was from AdWords, which allows businesses to advertise by popular keywords and the remaining 30% came from Adsense which allows different businesses to post ads on particular websites.

This year the total online ad expenditure has increased by 13% from what it was a year ago.

Social media tycoon Facebook grabbed second place in the top ten. Despite the unfathomable popularity of facebook, the company could only make $6.4b from online ads. This is in no way a small earning, that is if you can ignore the fact that it is a one-sixth of what Google makes.

Then there comes a bit too many surprises in the chart. Yahoo this year earned one-tenth ($3.5b) of what Google earned.

Meanwhile, LinkedIn stood on the tenth place managing a mere one percent of Google’s ad revenue. Online retailing giant Amazon found itself on the seventh place this year, with earnings of around $0.8b.