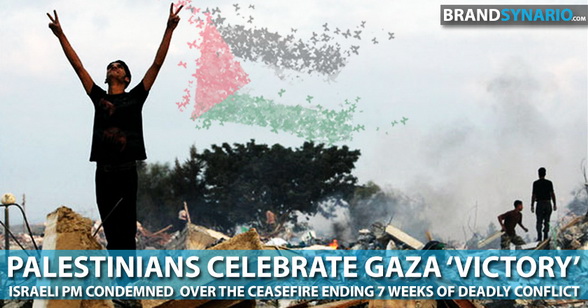 The bloody seven week conflict between Palestine and Israel that claimed over 2,200 lives has come to a ceasefire.

Hamas says truce is the answer to all those who claimed that Palestine was losing the war. Israel, despite of its modern ammunition, dense armed forces, technologically superior weaponry and persistent funding from United States, has failed to infiltrate & slay Gaza or Palestine.

However, both sides claim victory under the Egypt-brokered deal, as Gaza rejoices with bursts of celebratory gunfire. Speculators still doubt the lifespan of this ‘peace’ between the two arch rivals.

Not surprisingly, a bigger chunk of Media is portraying even this ceasefire as Israel’s triumph, and claiming it to be the proof of Israel’s sincerity when it comes to negotiations. Of course, that chunk of media lacks a basic history lesson of ‘The 1947-48 Civil War of the Mandatory Palestine’, but this intentional ignorance gives that media strong friends and stronger financial opportunities.

The recent conflict in the illegally occupied terrain by Israeli claimed more than 2,200 lives. Unfortunately, most of them innocent civilians and not surprisingly all of them were Palestinians.

Israel is now being considered a mentally sick nation on the whole, by the best of minds in the world. Even the Jews all across the world are condemning the inhumane acts of shear terrorism performed everyday by Israeli militants in the name of patriotism.

Illegal occupation of land, genocide of Palestinians and terrorism in the region is only three of Israel’s most wicked crimes. Who can forget Syria, Lebanon or Jordan? All of Israel’s neighbors are victims of the open terrorists in Israeli army uniforms.