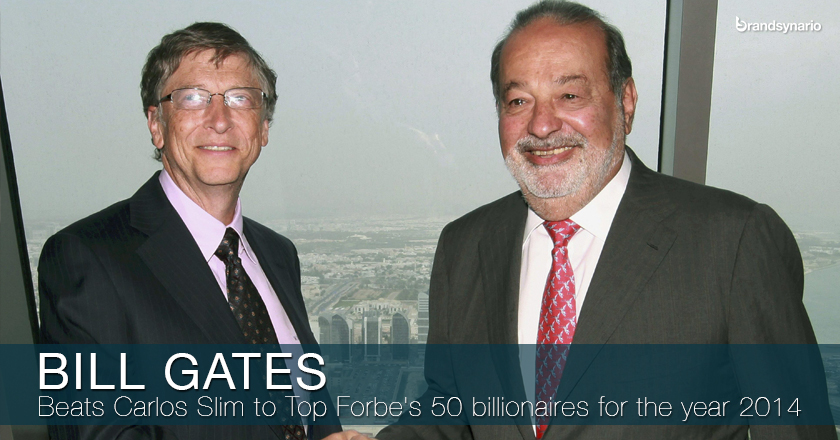 Every one aspires to be swimming in ponds of money, playing with gold coins and cherishing the waves of fame.

In order to fulfill this dream, we need to observe the experienced swimmers, who have made fortunes out of everything that they touched. When it comes to reference of the names of these Richards, Forbes bears the top of the mind recall for all of us.

Recently, Forbes has published the list of top 50 billionaires of the contemporary year 2014.

Topping the list, not to much astonishment is none other than Bill Gates. After recently acquiring Nokia, the pioneer of operating systems Microsoft, has established a net worth of whopping US 76 billion dollars. This helped him regain the position that Gates owned in the list till 2009, following the legacy of continuous growth and giving back to the society through Bill and Melinda Gates Foundation, it seems that the inspiring entrepreneur has destined himself to lead the list for some time.

Following Gates in the list is the man who reigned the Forbes billionaire list for the past 4 years, Carlos Slim Helú. Having philanthropy in his blood as Gates, Helu is the owner of Mexican Telecom. His extensive holdings in a considerable number of Mexican companies through his conglomerate, Grupo Carso, SA de CV, have earned him a net worth of US 72 billion dollars.

Next up in the list is the man recognized for the brand name of Zara, Amancio Ortega. Ortega is the Spanish fashion executive and founding chairman of the Inditex fashion group. Although he has retired from the managerial positions, his interest in the seeds that he sowed has allotted him a net worth of 64 billion dollars.

Finally, the name of Berkshire Hathaway appears in the list, for everyone who reads the list, wonders where the man popular for his wealth did, disappear from the list. Warren Buffet is widely considered as a pioneer of investment in 20th Century, and currently owns GEICO, BNSF, Lubrizol, Dairy Queen, Fruit of the Loom, Helzberg Diamonds, with his minor holdings in Mars and Coca Cola.

All this fortune helps him achieve a net worth of 58.2 billion dollars. Whereas the list inherits some of the classic players of money, the list also has some new comers breaking the ice like WhatsApp founders Jan Koum and Brian Acton, who recently sold their beloved app to Facebook for 19 billion dollars.

It seems that selling flourished businesses can actually get you to the list of Forbes. Another interesting fact finding of the list is that Forbes found 172 female billionaires (up from 138 last year) to include on the list of 1,645 people.It seems that women are minting good money too.

Clearly, Forbes billionaire list showcases that entrepreneurship and zealous spirit can actually help you achieve the skies. With Mukesh Ambani on the list, it is high time that we get a national from our country in the list too, bloating our chests with pride.