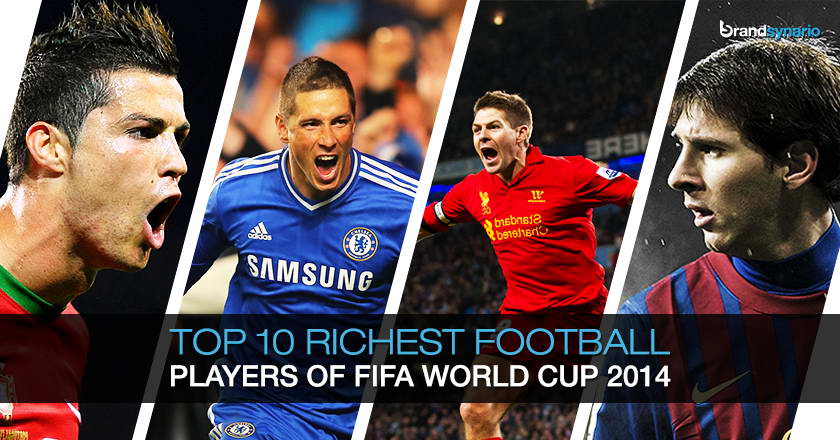 The FIFA World Cup 2014 is heading forward and so is the craze for the incredibly hot, extremely talented and ridiculously rich soccer players.
Be it cricket, hockey or football, every sport has its superstars who live in the limelight not just because of their talent or physique but because of their enormous bank accounts.

To keep the FIFA fever alive, Wealth-X made a list of the footballers in accordance with their net worth. Let’s hear it for the Ten Richest World Cup 2014 Players:

Who would it be except the great Portuguese player, Cristiano Ronaldo? The winner of this year’sBallon d’ or has a fortune worth of $230 Million.

Ronaldo’s personal assets account for nearly one-quarter of the combined net worth of the 10 players in the Wealth-X World Cup Rich List.

Always one step ahead or behind Ronaldo, the Argentinean player, Lionel Messi comes second with $180 Million.

Messi’s fame and popularity have made him one of the most sought after sports celebrity by teams and brands alike. He has been an active endorser for Gillette, Turkish Airlines, Adidas and many other global brands

One of the richest English players, Wayne Rooney, known as ‘Waazza’stands at the 3rd place with $90 Million.

The striker from Cote d’Ivoire, Didier Drogba with $90 Million comes at the 4th position.

Also a striker, Samuel Eto’o plays for Cameroon and cannot be blamed for investing too much on accessories because after all he is the 5th richest FIFA 2014 player with $75 Million.

Another Ivorian footballer, YayaToure plays as a midfielder for his country and has a fortune worth of $60 Million.

The most loved English hunk, Frank Lampard comes at the 7th position with his riches net worth of $60 Million.

Following him is another English footballer, Steven Gerrard who is also the captain of his team with $55 Million.

The only Spaniard, Fernando Torres comes 9th with his $50 Million fortune.

The Italian goalkeeper has the 10th position in the list with his $50 Million.