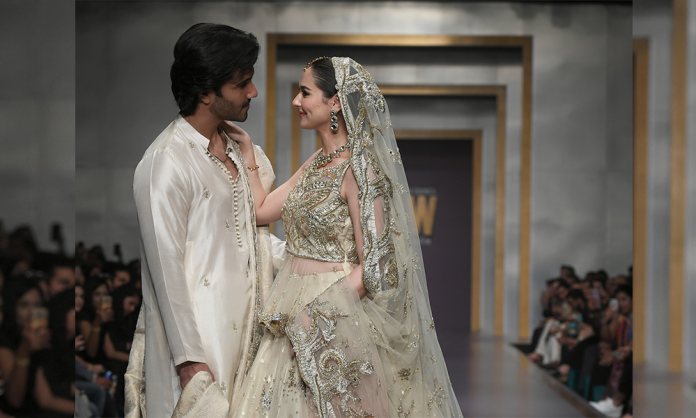 IFeroze Khan is pretty occupied with few new projects on his hands and we’ll be seeing a lot of him! We are actually super excited about Khaani superstar with the A-List leading ladies, Hania and Iqra. This will be the first time Khan will seeing with the dimple girl and Ajiya Nazak Ali.

Khan will be working alongside two very popular female actresses who are Hania Amir and Iqra Aziz. Each project is very different from one another and will show the actor two different avatars.

Feroze is all set to make his appearance with Hania Amir in an upcoming project Bezubaan. Directed by Badar Mehmood and penned by Mohsin Ali, Bezubaan is supposedly a love-hate tale in which Feroze Khan plays the character of a university student.

On the other hand, an untitled project is to be released soon which is directed by Wajahat Hussain and written by Hashim Nadeem. The cast includes Iqra Aziz and Feroze Khan. However, the title of the project is yet to be announced.

Moreover, Mawra Hocane and Feroze Khan are all set to make their comeback to the silver screen with Chakkar. Directed by Yasir Nawaz, the film will revolve around a murder mystery. However, it will also contain comedy scenes.

It was earlier this year that Farhan Saeed and Urwa Hocane announced their first home production. Upcoming film Tich Button would be the first-ever venture from Urwa Hocane’s and Farhan Saeed’s production house Shooting Star Studios.

The film has a star-studded cast including Feroze Khan, Farhan Saeed, Sonya Hussyn and Iman Aly in the lead roles. Directed by Qasim Ali Mureed, the film would be penned down by Faiza Iftekhar we’re eagerly waiting for this movie which will release in 2020.

After bagging the Lux Style Awards 2019 for the Best Actor in drama Khaani and rocking at the Fashion Pakistani Week Festive 2019, when Khan walked with Amir for Sadaf Fawad – Feroze Khan is becoming quite popular.

Let’s wait and watch what more does Khan brings to the table for his fans.