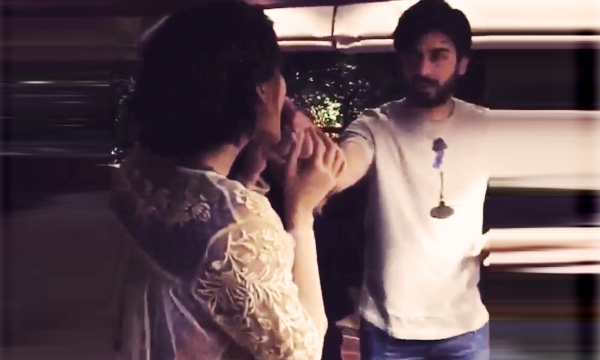 As we all know, Fawad Khan’s 34th birthday was a subdued affair, however, his Khoobsurat co-star Sonam Kapoor refused to let it be so. Sonam ducked out of the Filmfare Glamor & Style Awards early to celebrate Fawad’s birthday with his wife Sadaf and Sonam’s own sister Rhea Kapoor.

Sonam posted the following video on her Instagram. Watch the video below:

The only reason I Would run out of an award ceremony! Fk happy happy birthday! #Repost @rheakapoor ・・・ Accident-prone and celebrating his birthday a day late… Happy belated birthday Fk! @sonamkapoor @ifawadkhan ❤️

On November 29, Fawad turned 34. He was in Panjim that day with his better half, discussing entrepreneurship management at an event. His hotel suite was flooded with cakes from India and his home country.

According to Times of India, on the beaches of Goa, he bonded with Madhuri Dixit and her husband Dr. Sriram Nene, Bahubali actor Rana Daggubati, actress-author Shilpa Shetty and her husband Raj Kundra.Shilpa, who was at the same event to talk about health and fitness, grumbled that Fawad did not tell them it was his birthday until they figured it out during cocktail hour.

Happy Birthday @ifawadkhan , you didn’t even tell us last night would have wished u personally😁 A photo posted by Shilpa Shetty Kundra (@officialshilpashetty) on Nov 28, 2015 at 10:45pm PST