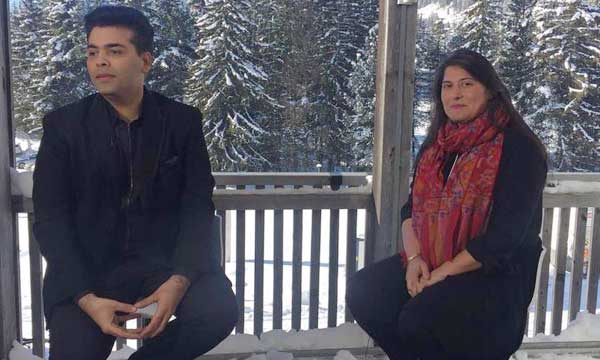 Just yesterday, Sharmeen Obaid-Chinoy was making rounds on social media for being the first Pakistani artist to Co-Chair at World Economic Forum 2017. Her tete a tete with Karan Johar was broadcasted live on the web and we bet, their candid chat earned a lot of views.

The talk between the Pakistani filmmaker and the Indian director touched many sensitive topics, making the discussion worth a watch!

Of course, Fawad Khan’s name popped up in their heart to heart and we all know it was inevitable!

we wanted to update that Two-Time Academy Award Winner and the Co-Chair at 47th World Economic Forum Annual Meeting, Sharmeen Obaid-Chinoy will be featuring in an exclusive one-on-one session with Bollywood director and producer Karan Johar [Head of Dharma Productions, India] titled ‘A Conversation with Karan Johar and Sharmeen Obaid-Chinoy’ on 18th January 2017 at Davos-Klosters. The session will be live streamed at 4:30 pm [PST] #SharmeenObaidChinoy #karanjohar #wef17 #pakistanmeetsuk #editorial

During their conversation. Sharmeen pointed out that she hopes that FK will yet again be seen in Karan Johar movies. But much to our dismay, the Bollywood director, very cautiously hinted that Khan will most likely never star in any of his movies.

“I have a great regard for talent and for Fawad Khan’s talent. So just like you [Sharmeen], I hope and wish Fawad finds the best platforms because he is a prolific actor”

While he was all praises for Khan, KJo divulged that he would never want to endure the political pressure again for any of his upcoming movies

“According to me he is a terrific actor. Having said that I would never go through what i went through again. Neither the situation nor the apology”

On Partition Between India and Pakistan

While taking queries from the audience, the pair got hit by a powerful question that if they would ever think about making a film on subcontinent’s partition and how it was a mistake.

“I would never say anything in history is a mistake. We weren’t there at the time nor were we making the decisions. We don’t know if we even have accurate facts,”

Sharmeen revealed that the ban on Bollywood movies in Pakistan is self-imposed and will be soon uplifted in the upcoming days.

“No one is in the favour of self-inflicted pain”

However, KJo shied away on commenting much on the topic and wholeheartedly agreed with Obaid’s statement!