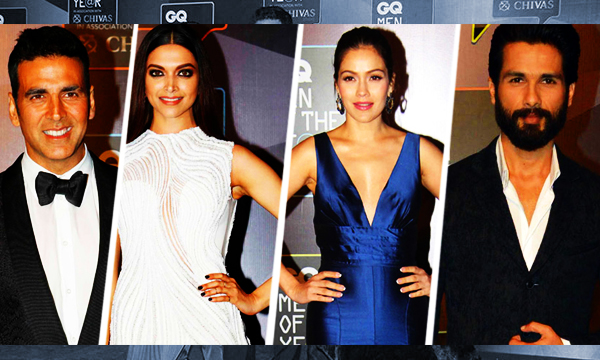 The GQ Men of the Year Awards 2015 were held on Saturday, 26th September 2015 at the Grand Hyatt, Mumbai. India’s celebrated contributors to the fields of sport, fashion and other genres graced the event and were presented with awards. It was a glittery, star-studded event which has been held for the 7th year in India. The winning actors for the night included the likes of Shahid Kapoor and Richa Chadda. Shahid Kapoor for his phenomenal acting in the Shakespearean-Bollywood adaptation of Hamlet i.e. Haider.

Meanwhile, other big wins for the night included Akshay Kumar and Deepika Padukone.

Take  a look at the red carpet pictures of the event:

Deepika, the Bajirao Mastani star, has been splashed all over Indian newspapers and tabloids, as the actress who has been battling depression as well as fighting the Women’s Empowerment cause with Vogue India.

Akshay Kumar, on the other hand, has bagged the title of “Ultimate Man of the Year.”

Related: Akshay Kumar is Back With Latest Movie Singh is Bliing

Here is the complete list of winners for the awards:

Chef of the Year: Gaggan Anand

Director of the Year: Rajkumar Hirani

Woman of the Year: Deepika Padukone

Philanthropist of the Year: Rahul Bose

Sportsman of the Year: Rohit Sharma

Designer of the Year: Sabyasachi Mukherjee

Actor of the Year: Shahid Kapoor

Take a look at the pictures for the Complete winners list as well.