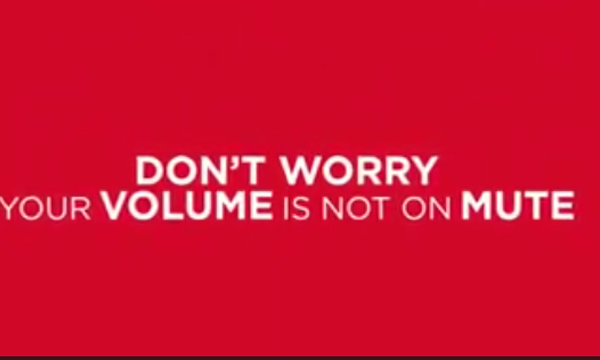 The brand Coca- Cola sure knows how to take advertising to the next level. Popular for its clutter-breaking campaign ideas, Coca-Cola has now come up with its first ever mute ad on TV as well as YouTube to create awareness about the new initiative ‘Coke Studio For the Deaf’. The idea aims to make people realize, only for a few seconds, what the Deaf community feels all the time.

The very first instinct when one watches this ad is to try and increase the TV volume or recheck whether it’s on mute. After a few failed attempts of trying to increase the volume of the song, a message then pops up on the screen intercepting the viewer.

This is what the message reads: “Over 9 million people in Pakistan have some form of hearing impairment, this is how they experience music. We believe music is a feeling everyone should experience.”

The idea behind the ad is to create awareness about the deaf community. Coca Cola sure has broken stereotypes.

Watch the advertisement that is currently running on TV, below:

Hats off to Coke Studio!

At the heart of the unique studio-like set-up enabling hearing impaired persons to feel and experience the music of Coke Studio, is a special sofa or couch embedded with hundreds of vibration engines and LED lights that are synced with the sound of the song being played. A grand LED installation around the couch provides synchronized mood lighting to elevate the experience visually. Finally, a LED screen in front of the sofa displays the video playback, while the studio is propped with guitars on stands, a drum kit, and a keyboard on a stand adding to the overall ambiance.

The setup invented in China was first tested out by the Coca-Cola brand team earlier this year when it was installed in Bangkok. A group of 8 students and faculty of the Deaf Reach School were taken to Bangkok to try out the system first hand. Their experience was nothing short of remarkable, with the group members actually experiencing Coke Studio for the very first time in their lives!

Based on this great success, Coca-Cola Pakistan decided to acquire the system for long-term use in Pakistan, with a vision to enable more people from the Deaf Community to also experience the music of Coke Studio. The system is expected to reach Pakistan in the near future.

In a statement about the event, the General Manager of Coca-Cola Pakistan, Rizwan U. Khan stated, “Coca-Cola, because of its all-inclusive brand trait, revolves around bringing people together. It shrinks social barriers and encourages people to share their emotions and experiences.”

However, despite reaching the masses, an estimated 9 million of our population have some form of hearing impairment, and have not experienced the magic of Coke Studio. We are really happy that we are now able to make them a part of this unique experience and keep them connected with other people who have been enjoying Coke Studio for the past 8 years.”

Richard Geary, founder and director of the Deaf Reach Program in Pakistan for the past 30 years endorsed the partnership with Coke Studio:

“Our collaboration with Coke Studio reflects our approach towards opening new experiences for the Deaf Community and creating enabling opportunities for their inclusion and success. Coke Studio’s new initiative will not only draw a circle to include those who are often marginalized, but serve to create more awareness and acceptance from the mainstream audience, helping them to better understand the challenges faced by those with a hearing impairment.”

Season 9 of Coke Studio, the biggest and the boldest yet, is expected to be launched in early August. It will feature both established artists and many talented newcomers, for whom Coke Studio promises to be a launch pad for their careers, as it has been for others before them in the past 8 seasons.