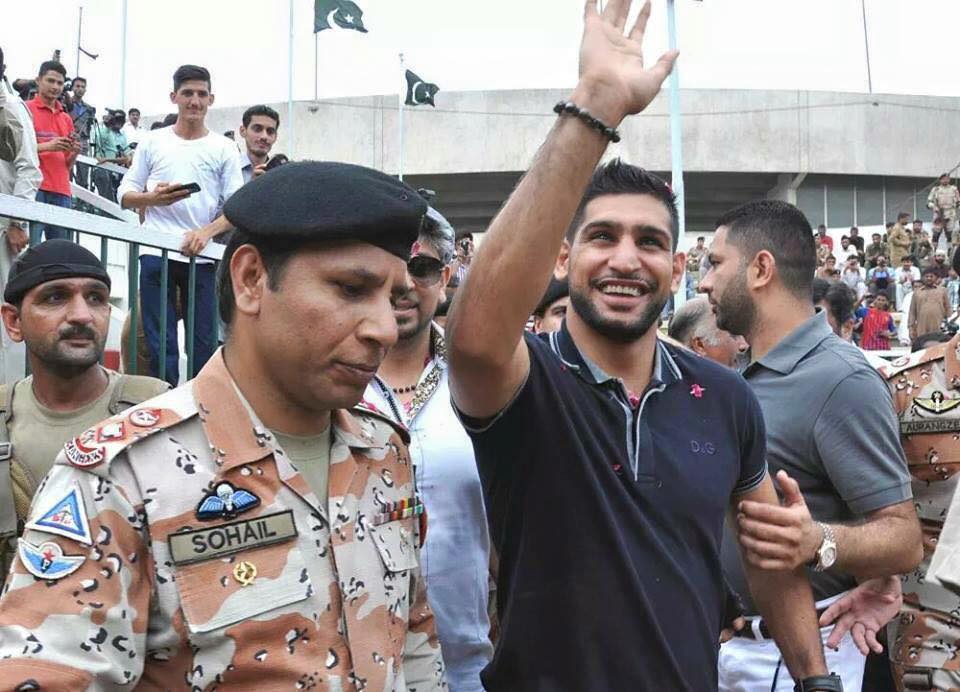 Amidst strict security, Amir Khan was warmly welcomed in a huge round of applause by the horde of cheerful spectators. Raining down rose petals in admiration, his aficionados presented him with an Ajrak and traditional cap

Encouraging the young Lyarites who aim to be world-class boxers, Khan instilled hope in them that the next boxing champion can rise from the land of Lyari. He also witnessed a boxing match, that the people conducted in his honor.

“I think we have the talent to produce boxing champions,” told the champ to the media

View pictures of his visit to Lyari here.

While Lyari is often in the news for being subjected to gang violence along with weak law and order situation, it is also famous for housing talented football players and boxers.

“I have made a promise to the nation that I will pay back what I have achieved in boxing,” he told media in regard to his plan for building an academy.

“I am here to meet potential champions and I am not afraid of anything, we will  beat terror and produce boxers of top quality,” he added.

Lately, the international sports player has been up and about meeting various Pakistani celebrities. Previously, he met Wasim Akram, Junaid Jamshed and Saeed Anwer.

Khan didn’t forget to meet Abdul Sattar Edhi during his visit to Pakistan and paid his respect to the noble humanitarian.

This is one person i really wanted to meet and is the reason I’m now in Pakistan. Edhi saab is a role model to millions of people for all the charity work he’s doing in Pakistan helping the less fortunate and poor. Edhi had a tear in his eyes knowing seeing i travelled thousands of miles to see him, but it was honour to be at his bed side. I’m happy to hear Edhi’s health is getting better. The Karachi Hospital doctors showed me and my team lots of love. Thank you #EdhiSaab #charity