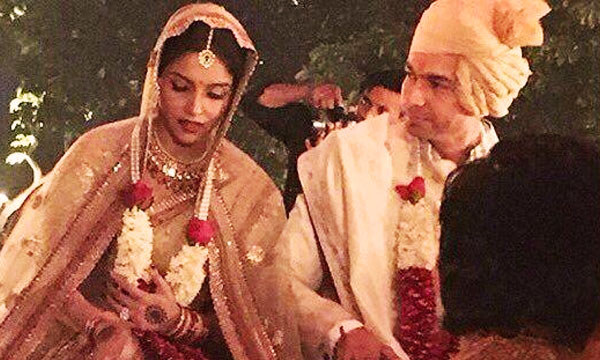 After a relationship of almost four years, the couple tied a knot today on January 19th in a Church wedding in New Delhi. The Hindu rituals were held later in the evening at Dustin Dervana Hotel.

Here are the exclusive unseen images inside Asin & Rahul’s wedding. Have a look!

Presenting another one of our dearest common friends who knew it all like Akki! #Balki #BalkiandAkki #ARwedding #Asin #Rahul #LoveLaughterandHappilyEverAfter Must Watch! – Have a look at some of these priceless moments from Asin and Rahul Sharma's weddinghttps://t.co/FjOFokDlhi

View some images from Church wedding and the Hindu rituals held later. A view of Dusti Dervana Hotel shared by Asin today. The Indian Express revealed that the couple had already chosen their wedding card for the guest list.

The card starts with an invite of ‘Save the Date’ that is a metal embossed card, following the party card invite as well.

Akshay Kumar and Twinkle Khanna were the first ones to receive the wedding card.

The Indian Express further revealed that the wedding celebrations will be held in New Delhi and a grand celebration for their friends and colleagues will take place in Mumbai on 23rd January.

Asin will be wearing a Sabyasachi lehenga for the evening ceremony.

The couple has been seen in the headlines since last year when Rahul finally proposed Asin with a 20-carat solitaire worth Rs 6 Cr (specially imported from Belgium).

According to the report published in The Times of India, Rahul went down on his knees to propose Asin with the ring that monograms AR (A for Asin and R for Rahul).

In August, Asin opened up about her relationship with Rahul in an interview, and said: “Rahul and I have been together for almost four years.” She also said that Rahul is an extremely selfless person.

“He is very selfless and outstandingly secure and I feel that’s pure love, the rest is selfishness. Throughout the relationship, his sole concern is my happiness,” she added.

Moreover, Asin also said that she would like to concentrate on her personal life. “I have been working from the age of 14 and as of now, I am not taking up anything and will definitely take a break from films,” said Asin.

They have been together for almost four years now.

Both the families have been waiting for Asin’s professional commitments to get over and now that they are over, the festivities of the wedding have begun.