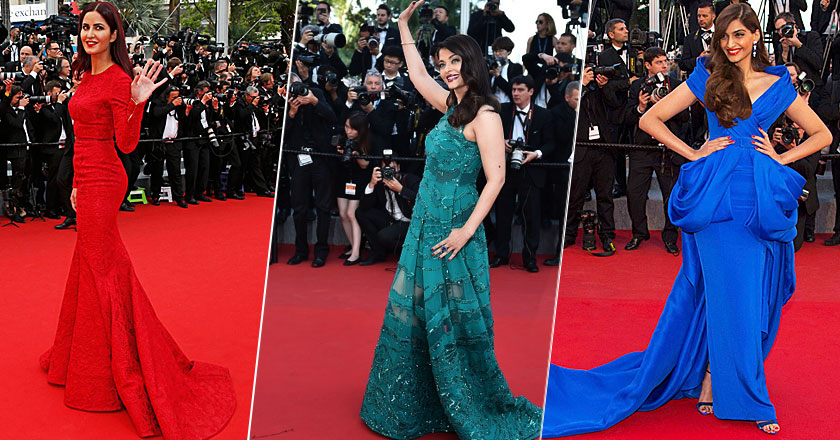 Cannes Films Festival 2015 is underway and it is one of those events where L’Oreal brand ambassadors, Aishwarya Rai, Sonam Kapoor and Katrina Kaif have all made Red Carpet appearance clad in the most stunning designer dresses.

It appears that veteran actress; Aishwarya Rai Bachchan who has been making Red Carpet appearances at Cannes since 2002 which is why she really knows how to pull off a show-stopping look. In stark comparison to the looks adapted by Katrina Kaif and Sonam Kapoor, who looked mere amateurs in contrast, despite the two beauties being younger than the former Miss World of India.

Aishwarya Rai turned heads draped in an elegant emerald green sheer Ellie Saab evening gown when she walked the red carpet on Sunday (May 17) for the screening of ‘Carol’ at the 68th Film Festival.

The gown did not do as much of the trick for her as the bold and popping hair and make-up she had pulled off.  Wearing her luscious tresses in delicate waves, Aishwarya wore a dark magenta lip color and green eyeliner that highlighted her teal-grey eyes. The overall look created was very charming.

Meanwhile, the Khoobsurat actress, Daddy’s girl and self-proclaimed fashionista, Sonam Kapoor made her fifth appearance at Cannes, dressed in an electric blue gown designed by Ralph and Russo Couture.  She accentuated the gown with Chopard sapphire and diamond earrings. The blue Zanotti sandals completed her look.

Katrina Kaif, Bollywood’s favorite import from overseas, made her debut appearance at Cannes this year. Katrina Kaif made her appearance at the Red Carpet in a red lace Ellie Saab belted evening gown that complimented her tall, graceful figure. Katrina glided down the red carpet, finishing off her look with matching red lip colour and hair to her dress. The dress, the hair, the make-up had too much red going on for Katrina, and it did render her a very mermaid-esque look.

Who do you think made the best appearance yet? Mention in the comments below