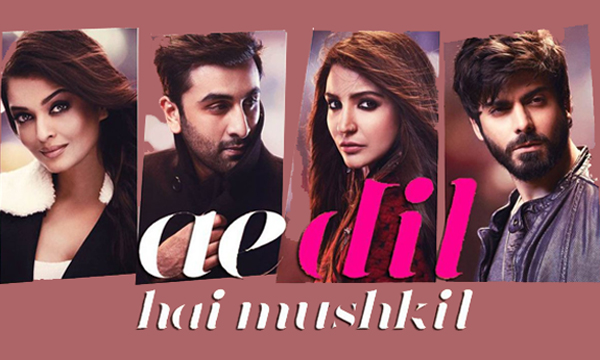 Twitterati is adoring Ranbir ‘s emotional acting and Anushka’s bubbly avatar in the tale. Ash’s bold character and her powerful performance have won the hearts of the audience. Many are even lauding Karan Johar for bringing back sweet memories of Kuch Kuch Hot Hai and Kal Ho Na Ho,

But the shocking thing revealed amongst all these reviews was the sad spoiler that Fawad Khan will commit suicide in the movie.

Spoiler Alert: Read at your own risk!

Those who have watched the movie have already unveiled the story line. Read what they shared here.

Meanwhile, the Twitter town is also buzzing with rave reviews for Ae Dil Hai Mushkil.  Indians seem to be loving it.

#AeDilHaiMushkilReview #ADHM gets thumbs up by critics& the movie recieved over 3 Star #RanbirKapoor #AnushkaSharma https://t.co/27sHZ5WXmB

Woken up with a #AeDilHaiMushkil hangover,experienced such different &beautiful emotions, lovely change from the usual @karanjohar we❤️you

Ranbir how terrific an actor.Evry single time one wonders why in the world he doesn't have entourage of HIT movies #AeDilHaiMushkil

Wow who wrote the dialogues for Aishwarya & @AnushkaSharma in #AeDilHaiMushkil ? Just too good, poetry in full flow !@karanjohar good job

#AeDilHaiMushkil #AishwaryaRaiBachchan is beyond stunning in the film & @ManishMalhotra has outdone himself with the styling! 💖💖 #ADHM #LOVE

But not all are praising the movie. Trollers and haters of Ae Dil Hai Mushkil are having a field day on social media.

#AeDilHaiMushkil is an average fair despite Ranbir's awesome act. 2.5/5

#ADHMreview
This movie #adhm continues to pave the way for destruction of #ranbirkapoor stardom. Go srkians to see @iamsrk n his asm looks