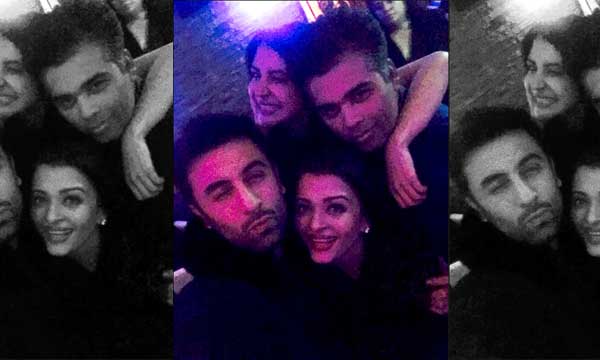 Pakistan’s hottest export to India, Fawad Khan is missing out on a lot of fun happening on the set of his upcoming Bollywood movie, Ae Dil Hai Mushkil opposite Aishwariya Rai Bachchan. Captioning the picture as the ‘Ae Dil Hai Mushkil’ selfie, Karan Johar shared a picture on his Twitter handle along with Aishwarya, Ranbir and Anushka. The film has been shot across Europe, starting at London and later moving to Vienna.

The film also stars some other prominent names in special appearances like Imran Abbas Naqvi, Fawad Khan and even Lisa Haydon.

Karan Johar has decided not to invite Fawad Khan for the promotions of his upcoming venture Ae Dil Hai Mushkil in India, after protests and threats from extremist political party Shiv Sena.

With direct threats to Pakistani actors, specifically Fawad Khan and Mahira Khan, producers including Karan Johar, Farhan Akhtar and Riteish Sidhwani are reported to plan to exclude said actors from promotions and shoots in India for their own safety.

Fawad Khan won a huge amount of fans with his debut as the suave prince in Khoobsurat only to bag more big banner projects, including Johar’s Kapoor and Sons and Ae Dil Hai Mushkil.

However, due to increasing threats from anti-Pakistan extremists, the actor will not be able to take part in any local movie promotions.

Karan Johar himself has been criticized by Shiv Sena for simply having used the word Bombay instead of Mumbai previously. The movie is slated to release in October 2016.