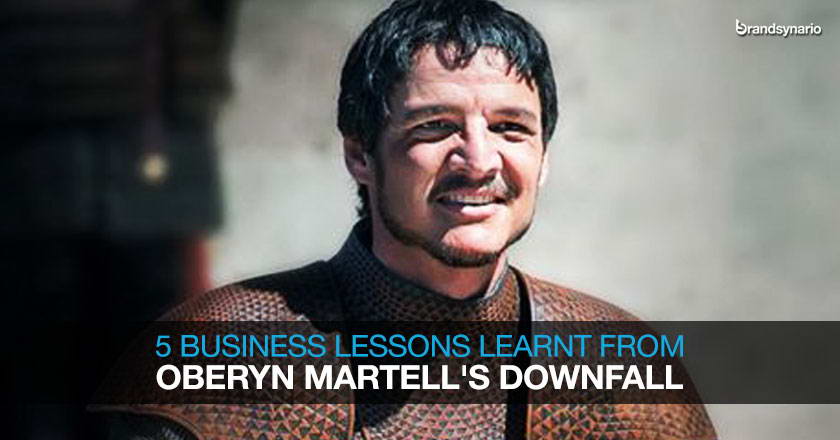 So by now, we all have seen it, discussed it and cursed the 8th episode of Game of thrones, The Mountain and the Viper.

If you still haven’t watched the episode then we suggest don’t!

The gruesome death of The Viper, Oberyn Martell has sent shock waves amongst GOT’s fans and reinstated the fact that one simply cannot get their hopes high with any character in this series.

Just when we thought Oberyn’s victory was in the hands, BAAM! The Mountain came back from the dead to complete one of the most gruesome, ghastly and gory murders of the show till date.

Although the entire fight was ironic from its very inception with The Mountain being the second strongest man of the world, however being the loyal fans we are, we still fell in love with Oberyn’s Dornish accent, his witty remarks and the devil may care attitude.

And like any other sad love story, it left us with many tears and a few thought-provoking lessons for life.

Here are five major business lessons learned from the downfall of Oberyn Martell:

1. Don’t Celebrate Before You Succeed

If only Oberyn was not so overly sure about his victory he would still be alive! This does reflect that until and unless victory is in your hands don’t boast about it.

2. Never Mess Up with the BIG Guys!

We all saw how GIGANTIC The Mountain was; in just one swift motion he managed to crack Oberyn’s head like a coconut. Hence proven, no matter how smart and quick you are, size does matter so it’s advisable that one should never mess with the big guns.

3. Leave Your Ego Outside the Field

Being pompous only takes success to your head and makes you lose your focus. The key to success is to never take pride in what you do. Overconfidence was one cause for Oberyn’s downfall; don’t let this be the cause for yours.

“Elia Martell of Dorne you raped her, you murdered her. You killed her children”.-Oberyn Martell.

Oberyn was obsessed with getting a confession from The Mountain so much so that he lost a battle that he could have easily won. His emotions prevailed over his thinking.  Turn off your emotional side before you entering a professional arena or face defeat because of your emotions.

5. Don’t Get High and Wasted Before an Important Moment

We all love our booze but drinking before a meeting or a fight, hmm.. not a smart move. You may think you have it in the bag but guess what? You can’t be certain of victory until it’s in your hands because even the smallest of things can change the dynamics of an event in just seconds and Oberyns death is a BIG example of that.

Leaving things in between always leave you distracted; only if he had finished what he started with his paramour!