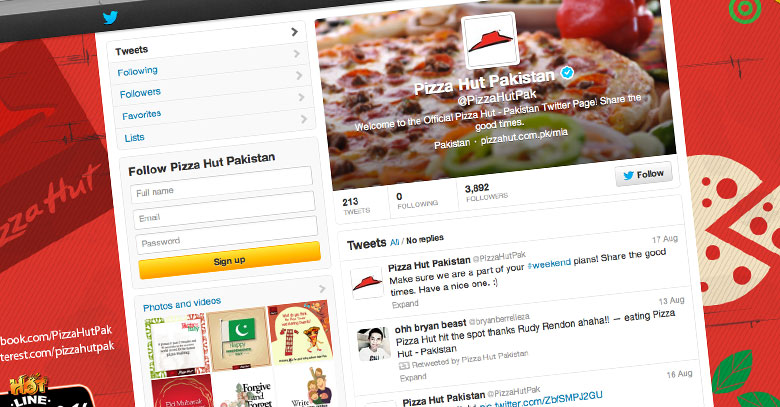 Pizza Hut Pakistan, backed by its plan to redefine its social media presence is all set to conquer the social media especially Twitter with its aggressive paid campaign.

Pizza Hut Pakistan entered the Twitter world in April 2013 and has gathered around 4,000 followers in a span of four months.

Although it has around 3500 followers which is miniscule compared to over 26,000 followers of Warid – the leading brand on Twitter in Pakistan – Pizza Hut continues to engage its followers through campaigns like ‘Thirty deeds of Kindness’ and ‘Chicken Festival’.

The ‘Thirty Deeds of Kindness’ campaign started on the first of Ramadan and generated interest amongst the target audience.

Digitz, the agency managing the Twitter page for Pizza Hut, are using promoted accounts to increase their followers and virality of the brand.

The pioneer pizza brand has been posting photographs and videos related to their latest global campaign ‘Pizza Mia’.

Previously Warid and Nokia Pakistan have been successfully promoting their campaigns and communicating with their customers on Twitter.
Twitter is slowly and gradually gaining momentum. With Facebook now working as a mature platform, Twitter is the next big thing, allowing brands to reach their target audience.