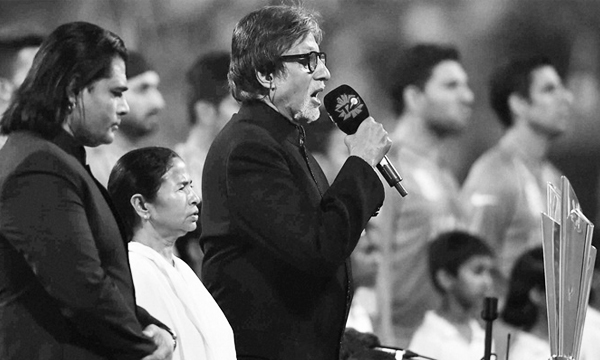 After Shafqat Amanat Ali, Bollywood’s megastar Amitabh Bachchan too is in hot waters for singing the wrong rendition of Indian national anthem.

According to Indian media, a complaint has been filed against the superstar at the Ashok Nagar Police Station in New Delhi, alleging that he sang the Indian national anthem incorrectly, during the World T20 clash between India and Pakistan.

Listen to Bachchan’s version of the national anthem here:

The complainant stated that the national anthem sung by Bachchan had used ‘wrong words’, while its duration had been 1 minute 22 seconds instead of 52 seconds as is the norm.

Here is a copy of the FIR: Earlier there were reports that the actor charged 4 crores as his appearance fee during the match. However, CAB President and former Indian captain Sourav Ganguly had clarified that Amitabh did not ‘charge a single penny’ for his performance. Instead, Ganguly said that Bachchan had paid Rs 30 lakhs from his own pocket for his travel and stay in Kolkata.