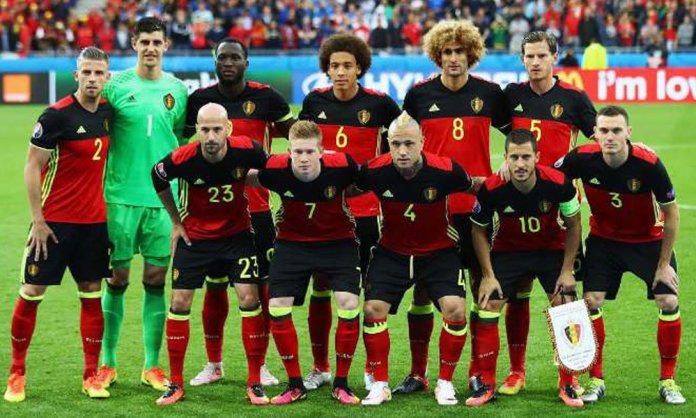 World Cup favorites France are targeting the final in Russia two decades after their 1998 triumph with one of their greatest players, Thierry Henry, plotting their downfall from the dugout of opponents Belgium.

The European neighbors meet in Tuesday’s first semi-final in Saint Petersburg for the right to play England or Croatia in Sunday’s showpiece in Moscow.

Former Arsenal and Barcelona forward Henry, who was part of the squad that won the World Cup on home soil 20 years ago, is now alongside Belgium coach Roberto Martinez and eyeing the chinks in France’s armor.

“It will be bizarre to have him up against us,” said France striker Olivier Giroud. “He is a living legend of French football.

“He has given so much to the France team and we have got a lot of respect for what he has done. But we’re not thinking about it too much, we’re going to be focused on the pitch and our game.”

A slick Belgium side boasting the talents of Kevin De Bruyne, Eden Hazard and Romelu Lukaku are the only team to have won all their matches in Russia and are the top scorers, with 14 goals.

Confidence is sky-high after they ousted Neymar’s Brazil in the quarter-finals but they will come up against formidable opponents in France as they try to reach a first ever World Cup final.

Didier Deschamps’ side, with Antoine Griezmann and Kylian Mbappe up front, struggled for goals in their group matches but have now hit their stride, dominating Uruguay after beating Argentina.

France will start the semi-final in Saint Petersburg as favorites, with an impressive mix of youth and experience allied to tournament nous after they reached the Euro 2016 final.

With Hugo Lloris impressing in goal and a solid midfield of Paul Pogba and N’Golo Kante, the one potential weakness for France could be their inexperienced defense.

Belgium’s Thomas Meunier will miss the game after picking up a second yellow card but France will be buoyed by the return of defensive midfielder Blaise Matuidi, after sitting out a suspension of his own.

– Southgate tells stars: you can be heroes –

For the fifth time in World Cup history, the semi-finals will be an all-European affair. On each of those occasions, the tournament has been hosted in Europe.

In the other last-four clash on Wednesday, England takes on Croatia in Moscow.

England boss Gareth Southgate has told his players they can be bigger heroes even than the generation of 1966, which featured Bobby Moore and Bobby Charlton.

“I’ve met quite a few of those players and we know exactly how they’re held and perhaps, in the modern era, that would be even crazier,” Southgate told British newspapers.

“(With) social media and everything else, the global thing is so much bigger.”

England is gripped by World Cup fever. Nearly 20 million viewers tuned in for the win over Sweden and social media is awash with videos of excited fans watching on big screens in bars and parks, fanatically celebrating every England goal.

Captain Harry Kane is the man leading England’s charge in Russia with six goals so far, putting him top in the race for the Golden Boot. Lukaku is on four goals and France’s Griezmann and Mbappe have three each.

Sterling was a key part of the Manchester City side that won the Premier League last season but he has been less effective in England’s charge to the last four for the first time since 1990.

“I think Raheem Sterling is an important player because he is fast and dangerous alongside Harry Kane,” Dalic said.

Croatia, who boast Real Madrid’s Luka Modric and Barcelona’s Ivan Rakitic in a strong midfield, emerged through extra-time and spot-kicks against Denmark before going through the same ordeal again against Russia in Saturday’s quarter-final.

“Our last three games were different because we played teams with a defensive approach,” he said.

“But we are looking forward to a different style of game against England because they like to play attacking the football.”