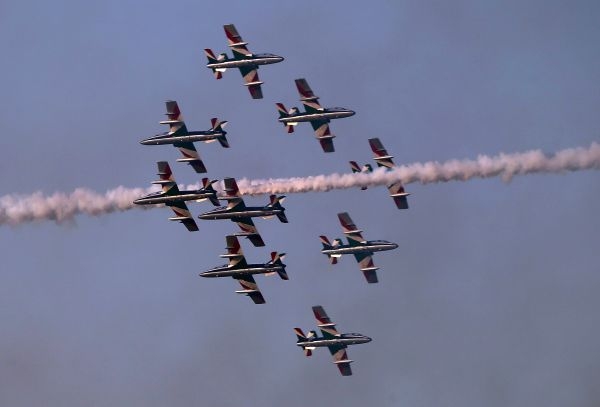 The Dubai Airshow took off Sunday to a slow start with a record low in sales expected as the Gulf’s main airlines have already placed large orders with major manufacturers.

“Due to large previous orders, the total show order tally this year will be much less than years prior,” said Ben Moores, senior analyst at IHS Aerospace, Defence &amp; Security.

Organisers say the last edition of Dubai Airshow generated business of up to $200 billion (185 billion euros), with orders for planes in the first few hours alone topping $162.6 billion, beating the show’s previous record of $155 billion set in 2007.

But this year’s show might have a “record set for lack of sales,” Moores said.

There is currently an order backlog of 750 widebody aircrafts for the Gulf region, so further orders are unlikely, he said.

Over 1,100 exhibitors from more than 60 countries are taking part in the biennial fair. They include major aircraft makers Airbus and Boeing, which in competition for a larger chunk of orders from the ever-growing air travel sector in the Gulf region.

Dubai’s Emirates along with Abu Dhabi’s Etihad and Qatar Airways — the Gulf Three — already have a long list of orders placed with the US and European rivals.

Some of those carriers have made it clear that they do not intend to make major announcements at Dubai Airshow.

James Hogan, the chief of Abu Dhabi’s fast-growing Etihad, said earlier this year that his company has made enough orders to cover its expansion plans to 2040.

The airline took delivery in December of the first unit of 10 Airbus superjumbo A380 planes ordered, as well as the first of 72 units of Boeing’s long-haul 787 planes.

On Sunday, Etihad made one announcement, firming up orders for two Boeing 777 freighters that were part of options taken earlier.

It said the new aircraft are valued at $637 million at list prices and are due for delivery next year.

Emirates Airline, the largest operator of A380 and Boeing’s 777 widebody, last year finalised an order for 150 new 777 planes, valued at $56 billion at list prices.

“Emirates signed many deals two years ago,” the carrier’s chief Sheikh Ahmed bin Saeed al-Maktoum told AFP, implying that no major deals are to be expected this year.

Earlier he told reporters that “most Gulf airlines agreed to many deals in the last edition of the show. We do not expect it” to place major orders.

Boeing said earlier this month that the Middle East region will require 3,180 planes over the next 20 years, worth $730 billion.

“About 80 percent of the world population lives within an eight-hour flight” from the Gulf region, said Randy Tinseth, vice president for marketing at Boeing Commercial Airplanes.

The Gulf carriers have established their home airports as major hubs for transcontinental travel, drawing accusations from European and American carriers of subsidies giving them an unfair competitive advantage.

Embraer, which specialises in making planes that seat up to 130 passengers, forecast the Middle East to demand delivery of 220 new jets in the 70 to 130-seat segment through 2034, valued at $10 billion at list prices.

Although most of the region’s double-digit growth over the past decade came from long-haul flights, “the regional segment has significant importance to the region, feeding the hubs and accessing smaller markets,” it said.

So far, “in 2015, 41 percent of the intra-Middle East flights departed with less than 120 passengers,” it said, adding that these markets cannot be “efficiently served by bigger jets.”