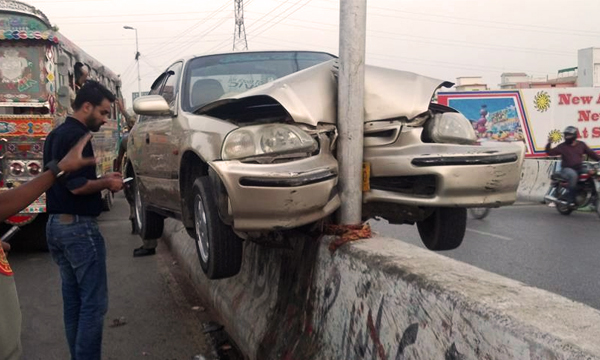 Recently, images of a rather unbelievable car crash have emerged over social media. The pictures show a Honda Civic perched on the boundary wall of a flyover! The car apparently climbed over the wall and kept going till it crashed against a streetlight pole.

Comments show that the accident occurred in Karachi at the NIPA Flyover, Gulshan and that a woman was driving the car. Fortunately, she is unharmed. However, the real question is, how did the car get there?

View the reactions below:

Horrible accident at Nipa Chowrangi Flyover Karachi the lady who was driving is safe and sound but She took wrong meaning of flyover!

The lady took the wrong meaning of FlyOver at Nipa Bridge. She is safe by the way. pic.twitter.com/3hgHHGMwKG — Danish Rasheed (@Dannrasheed) August 12, 2015

that’s how Girls #drive, Flying over the bridge. #Accident at Nipa Flyover #Karachi the lady who was driving is safe. pic.twitter.com/l3mUHRlEkc