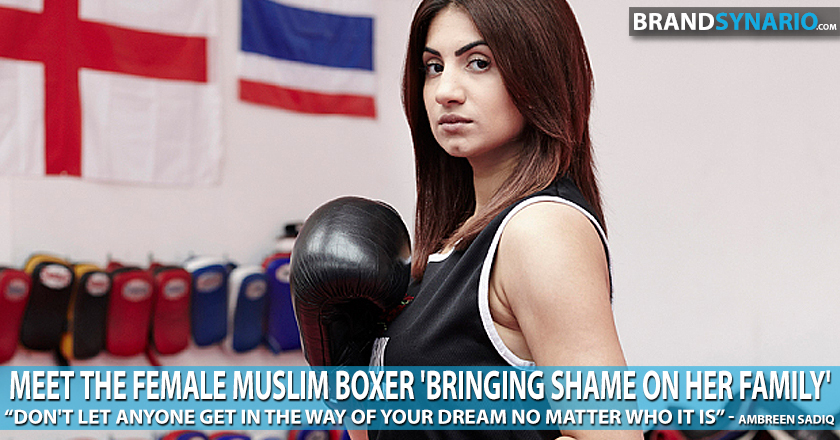 Ever realized how a major part of our instinctive behavior, whether we want or not, is a function of our traditions and values, demarcated by the societal expectations, morals and beliefs. How the significance of such confines and precincts is amplified whenever a female member of any society, any culture, and any religion is involved.

A Female Muslim Boxer Ambreen Sadiq, a British Born Muslim explains her story, her battle against bigotry and discrimination from her community and even her family.

Ambreen Sadiq is a 20 years old, former UK national champion who teaches students how to box and trains in her spare time.

After all the hardships and abhorrence she had borne, Ambreen’s story is being told in a drama, titled “No Guts, No Heart, No Glory” which is now being performed at the Edinburgh Festival.

The play depicts Ambreen’s journey and the product of her work with five Muslim female boxers, aged between 16 and 22.

WATCH: A video clip of No Guts, No Heart, No Glory

Sadiq has been challenged by stern chauvinism and prejudice from the Muslim community, her neighbors, her school friends and even members of her family. Each one of them had different objections concerning about her religion, her gender and her uniform.

Ambreen belongs to a Pakistani Muslim family and her paternal side of the family never approved of her profession, regardless of her excellence and passion for boxing.

They always pinpointed that Ambreen has brought shame to the family because she is an Asian Muslim girl.

Ambreen’s parents have always been the greatest support. It was because of her younger brother and father that she developed her interest in boxing, after they started practicing it at the local gym.

Ambreen’s first fight was so successful that it was highlighted by local newspaper and was covered by a Channel 4 documentary.

She was a star only after her first fight. But along with the fame came deterrence, every step of the way was a hurdle to pass.

Nearly everybody she knew became a stranger; she saw how people who praised her on her face, gossiped about her at her back, questioned her talent.

She explains how school turned into a nightmare. People called her a transgender, claimed that she is doing a man’s job and ridiculed her muscular body.

She declared that she has even received death threats on social media form people who had a stereotypical view point.

In your opinion, has Ambreen brought shame/fame to her family and religion?