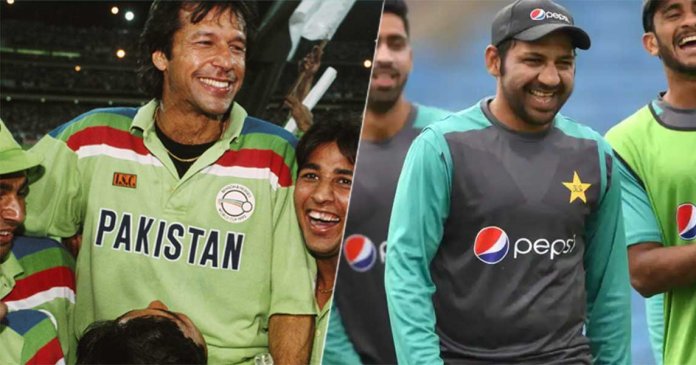 As the ICC World Cup advances, cricket fans and critics are beginning to witness noticeable similarities between the 1992 tournament in which they started weakly but ended up lifting the trophy in Melbourne.

The same sequence of wins and losses have made millions of fans believe that Pakistan could win that trophy once again.

In both World Cups, Pakistan started with a one-sided defeat to the West Indies, before winning their second game and recovering. Previously it was against Zimbabwe in 1992, and it was England this time around.

Similarly, their third game was rained off in both the tournaments and they then went on to lose their next two games and win the two that followed.

The final win in both series was against New Zealand, who were unbeaten in both 1992 and 2019 until they played against Pakistan.

“It was same, the same sequence of results, points and then we wanted Australia to beat the West Indies for us to qualify,” said Wasim Akram, who played for Pakistan in 1992.

“Then also we beat New Zealand — who was unbeaten then too. A lot of similarities, I hope the end result is also similar now and we win the World Cup,” he added.

Wasim was the leading wicket-taker in 1992 with 18, while this time around, Pakistan left-arm pacer, Mohammad Amir, is second on the bowler’s chart with 16 so far.

"It's a no-brainer, history is going to repeat itself."

The Pakistan fans are getting very excited about the many similarities between the 1992 and 2019 World Cups.#WeHaveWeWill | #CWC19 pic.twitter.com/fqWC2YatCt

In 1992, Disney released the animated movie, Aladdin. In 2019, Disney releases the live action version of Aladdin. OMG IT'S A SIGN. #CWC19 #NZvPAK pic.twitter.com/iOJOJCu8qG

We really wonder if Pakistan is reliving the 1992 World Cup. Although this could all very well be nothing but a coincidence, fans are counting on the similarities and hoping to win the tournament.

We wish Team Pakistan all the very best.