HBL PSL 4 Draft 2019 is just around the corner, the 4th edition of the league will start in a couple of months.

Pakistan Cricket Board (PCB) has unveiled the full schedule for the latest edition of Pakistan Super League (PSL).

Thirty-four (34) matches will be played in the fourth edition and for the first time in the short history of this highly successful and much-awaited tournament, Lahore and Karachi will share eight matches between them at the back end of the 32-day event.

The tournament will kick-start on 14th February 2019 in Dubai, and the final match will be played in ‘The City of Lights’ Karachi on 17th March.

Dubai will be host to 7 matches until February 17th. The tournament will continue in Sharjah from Feb 20th-24th for 8 matches.

Teams will return to Dubai once again for another 7 matches on 26th February before leaving for Abu Dhabi to play 4 matches from 4th-5th March.

The league will then come home to Pakistan on 7th March where the last 8 matches will be played. These include the qualifying rounds, eliminators and the final. 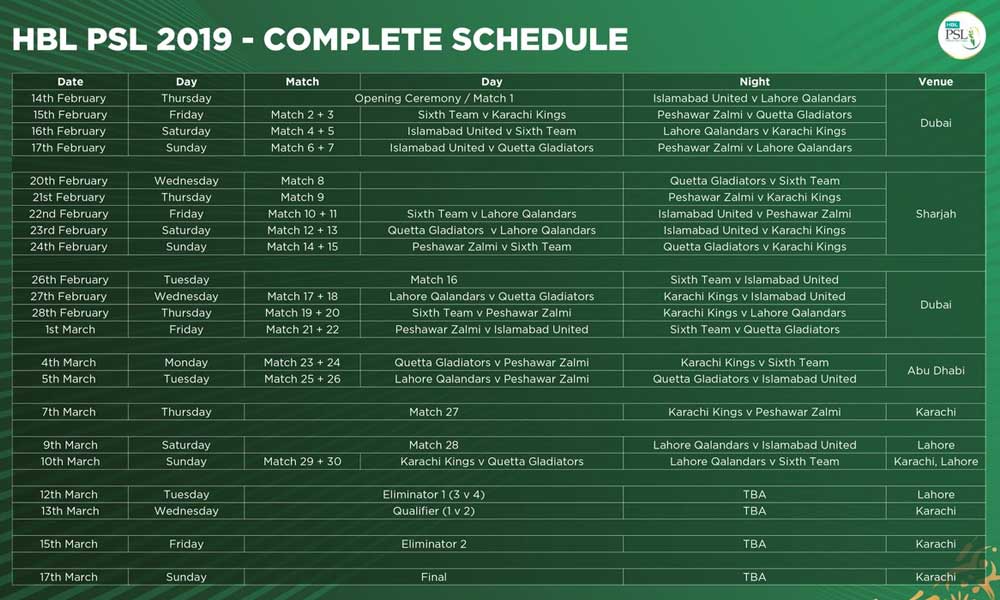 The defending champions have the following players retained:

Since Multan Sultans is no longer participating in PSL 4, a new team will replace them.

The following are the major developments which have been made for PSL 4 2019:

Pakistan Cricket Board has terminated the contract with Schon Properties for Multan Sultans as the franchise failed to meet its financial obligations.

Following the termination of the contract, all rights in respect of the team have now been reverted back to the PCB.

Supplement (US $175,000): This category doesn’t have a maximum and minimum payroll. It’s an additional round, allowing teams to pick extra players as a backup. They can pick a maximum of four players from the purse of $175,000.

The players have also expressed their enthusiasm and interest in the start of the HBL PSL 2019.

Waqar Younis, who is the mentor of Islamabad United, said: “The HBL PSL is one of the most entertaining but difficult tournaments in which each match counts. You have to turn up at the top of your game every time you step onto the field so that you stay clear of the danger zone.

“Islamabad United have a talented and all-around side, with each and every member capable of conhttps://www.youtube.com/watch?v=4Ey8RxF0pvgsistently producing match-winning performances. I have no doubts that the2019 event will be a great spectacle and I urge all the spectators and fans to play their part in making this a successful event.”

Karachi Kings’ captain Imad Wasim said: “Eight HBL PSL matches taking place in Lahore and Karachi is great news for the Pakistan cricket fans and I look forward to captaining Karachi Kings at the historic National Stadium. We will have to be at our best in each match to ensure that we also feature in front of our home crowds on March, 17.”

Shoaib Malik, who will captain the sixth team, said: “We have a very balanced side, which is capable of going all the way in the HBL PSL. This tournament is not only designed to provide entertainment to the fans, but is also a vehicle for the local players to learn and getter better by featuring in high-pressure matches and through the presence of international stars.

“We also look forward to welcoming Steve Smith and Shahid Afridi, two absolute legends of the game, to the side and hope they will play their lead roles in helping us cross the line. Like all other players, I can’t wait for this event to start and hope to hit the ground running from the opening day.”

Sarfraz Ahmed, who captained Quetta Gladiators to two finals, said: “We are a team which has always received overwhelming support from entire Pakistan, particularly Quetta. This has been one of the cornerstones of our strong performances in the past events and hhopefully, we will be able to do one better in 2019 by lifting the silverware in front of the National Stadium crowd.”

Daren Sammy, who captained Peshawar Zalmi to the title in 2017, said: “The HBL PSL is one of my favorite tournaments and I not only look forward to playing in it in a few weeks’ time, but also look forward to once again featuring in the final. “Zalmi are known for their aggressive and attacking cricket, and I am confident that we will win more hearts by successfully and regularly displaying our strengths every time we take the field.”