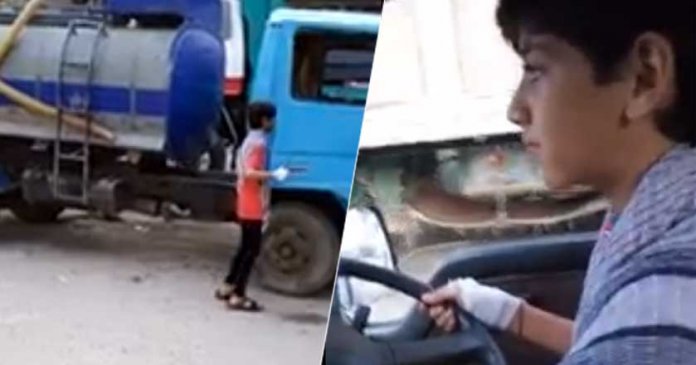 Update- 15th July 2019: Recently, a video has been doing all rounds on social media in which an eight-year-old girl, Kushi, can be seen driving a water tanker in Karachi.

It has been said that the minor girl has been driving the tanker to earn money for the treatment of her father who is paralyzed and support her family members.

In the videos, she shares that she is heading to Rasheedabad to fetch water from Sher Shah.

Last week, a press conference was held at Karachi Press Club where the minor girl revealed that her father suffered from a paralysis attack about a year ago. She is the only bread earner for her family now and demanded to let her drive the water tanker.

Kushi shares that she wants to go to school and become an army officer but because of their circumstances, she cannot do so.

The main concern that arose from this situation is if the girl meets an accident of any loss, who will be responsible? Her family? The employer? The authorities? Or everyone?

Update- July 11th, 2019: Power supply to the Gharo pumping station will be suspended from 9am to 4pm today (Thursday) due to maintenance work being done by K-Electric.

Therefore, the following areas in Karachi are expected to suffer from a water shortage:

June 20th, 2019: Severe water shortage is being reported in around 65% areas of Karachi since a while now, and this serious environmental issue remains unresolved till date.

Considering that water is the most basic necessity, it is deplorable that the authorities have been unable to take any prompt or sustainable action on the issue.

Residents of Lyari Water shortage in Karachi https://t.co/2WrntnVmay via @YouTube

A notable factor is that the citizens have been paying their water bills despite the scarcity they are facing.

Moreover, the citizens are demanding an answer to how the notorious Tanker Mafia obtains and distributes water around the city if a shortage truly exists.

If there is water shortage in karachi so where the hell these 18 wheels tankers fill water throught different hydrants operted by water mafia. pic.twitter.com/GYFnstDLG2

Recently peaceful protests for the same have been conducted by the public in multiple areas of Karachi.

Tomorrow! A peaceful protest against water shortage in DHA Karachi to be held at 8.30am on 18 June outside Cantonment board Clifton (CBC), Main Khayaban e Rahat
Phase 6, DHA. pic.twitter.com/Vy6Oam2cNb

PTI protest against water shortage and Tanker Mafia in Karachi infront of Water Board Head Office.

The following comprehensive list areas suffering from the water shortage crisis gives us a clearer picture of how dire the situation is. Around 11 areas in the list have been victims of the crisis for several years now.

Is your area part of the list, too? And have any alternate measures been taken to improve the situation?

Licenses to be Mandatory for Buying New Motorcycles: IG Sindh