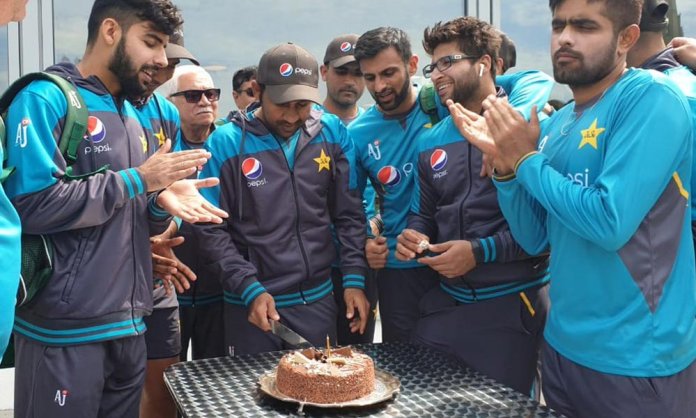 Pakistan national cricket team‘s skipper Sarfaraz Ahmed turns 32 years old today. On account of his birthday, his teammates celebrated the occasion with the captain. However, many individuals have criticized him for his celebrations.

His birthday has come during the holy month of Ramadan when Muslims around the world observe fasting from dawn to dusk. However, in the video, it can be seen the boys were celebrating and cutting the cake during the day.

Other cricketers in the video that are visible are Shoaib Malik, Imad Wasim, Wahab Riaz, Babar Azam, Imam ul Haq, and of course head coach Mickey Arthur to name a few.

While the video does not show anyone eating the cake, it can be seen that the knife is picked and a slice in being cut towards the end.

Because of this, a debate has sparked over social media where half fans are claiming that the boys should have respected Ramadan while the rest say no one knows who ate the cake if they did.

Last year, Wasim Akram also faced a similar backlash from social media after his birthday was celebrated during the holy month. He was accompanied by Waqar Younis, Zainab Abbas, and others.

What do you think about the celebrations? Were the boys right to celebrate Sarfaraz’s birthday or was it wrong?