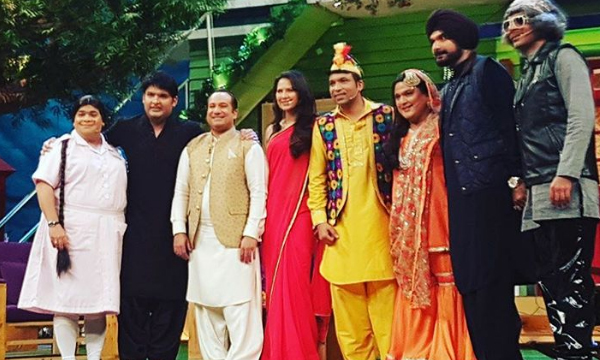 There is always something new and exciting in Kapil Sharma’s show, not just with the scripting but also with the guest appearances and this time The Kapil Sharma show’s latest episode, slated to be aired on 19th June is featuring the veteran singer Rahat Fateh Ali Khan.

Carrying an ethnic code of dressing by wearing a white salwar –kurta and a light golden Nehru Jacket by Jhanvi Bhandari, Khan was seen giggling on the sets of The Kapil Sharma Show.

The singer also released a teaser image and date of his appearance in The Kapil Sharma Show. Have a look here: Have a look at the teaser of the program here:

According to the Times of India, there are a lot of new and exciting things in the scripting this time. All time favorite comedian, Ali Asghar will be seen dressed up in an Anarkali avatar, whereas Kiku Sharda will grab the attention of the audience by playing the role of a Nawab. On the other hand, Kapil Sharma and Navjot Singh will be seen wearing a black kurta-pajama.

No doubt, Kapil Sharma’s show has something new for its audience every time and that’s what makes it the most liked show across the world.