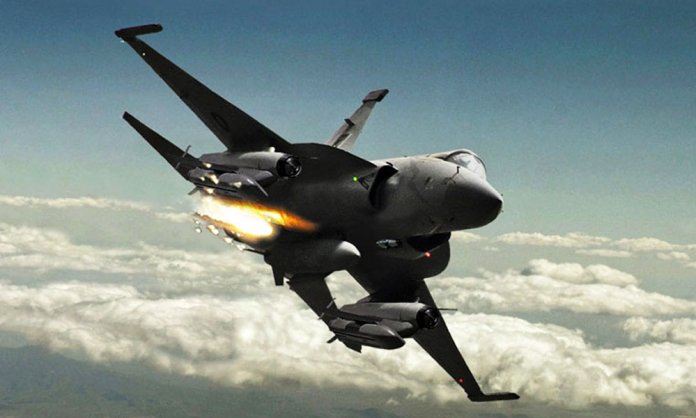 Pakistan Air Force (PAF) has successfully tested one of its popular fighter jets which goes by the name JF-17 Thunder.

Also described and codenamed ‘Smart Weapon’, the jet test-fired a missile which was proven to be successful.

The announcement of the JF-17 Thunder’s success testing by PAF comes after the sudden escalation tensions between neighboring countries India and Pakistan, which have seemed to slightly dip in the last couple of days.

An Indian Pilot was also captured, released, and returned home by Pakistan as a peace offer to prove to India that the country does not believe in war as the answer.

An official PAF statement says that the JF-17 multi-role fighter aircraft on Tuesday fired the new missile, which has “day-and-night capability to engage a variety of targets with pinpoint accuracy.”

Air Force chief Mujahid Anwar was quoted as saying that “Pakistan is a peace-loving nation but if subjected to aggression by an adversary, we will respond with full force.”

“Successful trial has provided JF-17 Thunder a very potent and assured day and night capability to engage a variety of targets with pinpoint accuracy,” the military’s public affairs wing said.

The JF-17 Thunder has been indigenously built by Pakistan Aeronautical Complex, Kamra in collaboration with China.

Our proud our JF. 17 THUNDER pic.twitter.com/tYHBFrWnbZ

JF-17 Thunder fighter jet is about to get a major upgrade. The upgraded version of Pakistan-China co-developed fighter jet is undergoing development and production. pic.twitter.com/R0zCc9BjRx

Haha lol we don’t beg we made our own net JF-17 THUNDER also export these jets too 😂😂 unlike your (samosa) Tejas jisko koi thukta bhi nhi 😂😂😂
Dusro ki technology pr guzara krne wale khud kya banae ge 😂😂 also we’re going to have block 3 which will be even more better pic.twitter.com/C4BTqJ8XTL

I am the Roar before every storm, An inchling of doom for those who dare to be my enemy✌🏻.
My every turn designed to strike fear into hearts of those who challenge me✌🏻

I am Thunder itself 🇵🇰
I am JF-17 Thunder 🇵🇰
#شمشیرِحیدر_ہیں_ہم pic.twitter.com/pF1wU0Tdph