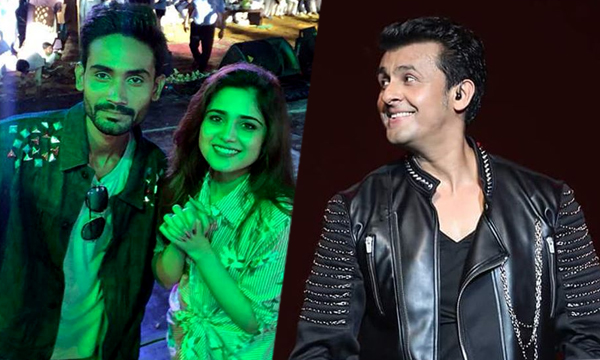 Just a few days back we all woke up to a beautiful video of a Pakistani Paint Wala, Muhammad Arif, singing Bollywood songs while casually doing his work.

His singing struck a chord with the netizens and the video went trending in no time. People all over the social media were observed appreciating his amazing talent. From Twitter to Facebook, all our news feeds were filled with love and praise for Arif.

You must’ve been living under a rock if you don’t know him but here’s the video of Arif that went viral.

Twitter done bits for that #ChaiWala – now to do the same for this #PaintWala ❤️ pic.twitter.com/6YNfOaCHAf

Guess what? His videos traveled all, the way to Indian and Bollywood singer Sonu Nigam heard one of his soulful tracks.

Of course, Nigam was all praise for our very own paint-wala singer and thanked his Pakistani friend who shared the video with him.

Thanks, dear Ahmed Godil very happy to hear him sing this song. He’s already become extremely famous in India too. Little Taaleem and he’ll become someone whom people will vouch for. God bless him. God willing he’ll be getting his due Musically henceforth..Hope you are good.. Lots of love and prayers.

Later on, the Indian singer even shared a clip of GEO TV that featured Muhammad Arif thanking Sonu Nigam for appreciating his talent

God bless him. He must have done something good in his life.. The love that he’s receiving, is God’s grace indeed.

Previously, Sony Nigam was in news for his controversial views on Muslim prayers in India. But this time around it is different.

Gone are the days when it took years for people to catch other people’s attention. This is the era of social media. It wouldn’t be wrong to say that the internet can make or break anyone.

Previously, we have seen other hard-working people going viral on social media. Remember, the chai-wala? Who was later assigned for some modeling projects with some famous people?