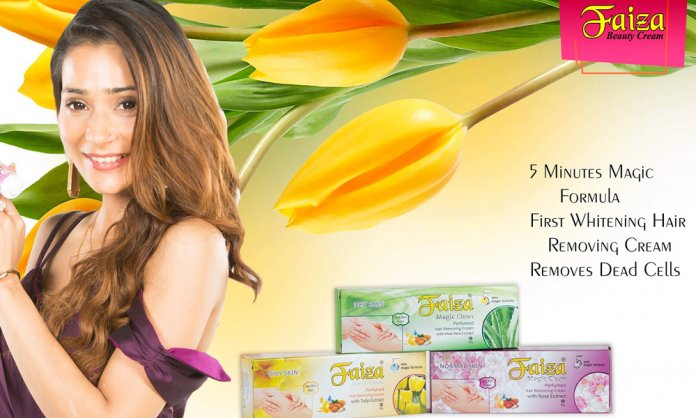 It is a common practice by Pakistani brands to feature Bollywood celebrities as ambassadors in their campaigns.

From Kareena Kapoor in QMobile’s ad to Nargis Fakhri in Cola Next, Sonam Kapoor in Tarang’s TVC to Nawazuddin Siddiqui in Kenwood’s campaign; there is a never-ending list of Indian stars that have gleefully endorsed products made in Pakistan.

Will Bipasha Basu be seen in a Pakistani Ad for Olivia – Shukriya?

Continuing the trend, popular fairness cream brand ‘Faiza Beauty Cream’ too made use of a Bollywood celebrity endorsement for its latest campaign.

Touting its brand extension of a new hair removing the cream, Faiza roped in the rising Indian model and actress, Sara Khan.

The actress has worked in various Indian dramas and was also seen in popular Pakistani drama ‘Bay Khudi’. She has also appeared in Bigg Boss and Nach Baliye.

Watch the TVC below

The starlet can be seen in the TVC promoting ‘Faiza Magic Clean’ and its properties of a skin whitening formula and removing dead skin.

However, Khan is now receiving major backlash from Indians for starring in a Pakistani commercial.

There is a rain of hate comments on her Instagram post, all slamming her for working in yet another Pakistani project. 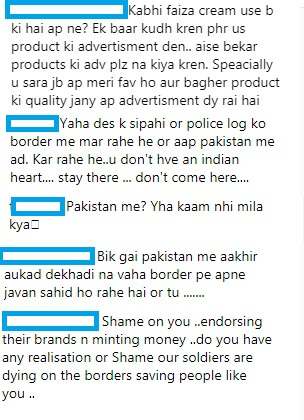 Meanwhile, Faiza Beauty Cream itself has raised a lot of eyebrows for rolling out its new hair cream.

Many might not be aware but in 2017, BBC London ran a story about how numerous shops in London have been fined for selling fairness beauty creams that contain harmful and poisonous chemicals as core ingredients for their products. The list of beauty brands also included Faiza Beauty Cream.

Choosing Sara Khan as brand ambassador worked for Faiza Beauty Cream or not, only time will tell. The actress is a quite a controversial figure across the border and is often under fire for being a part of various scandals.

Yet again, the actress has stirred some major trouble for herself in India. This time, it has to do something with Pakistan.

What do you think about the TVC?  Let us know in the comments below.