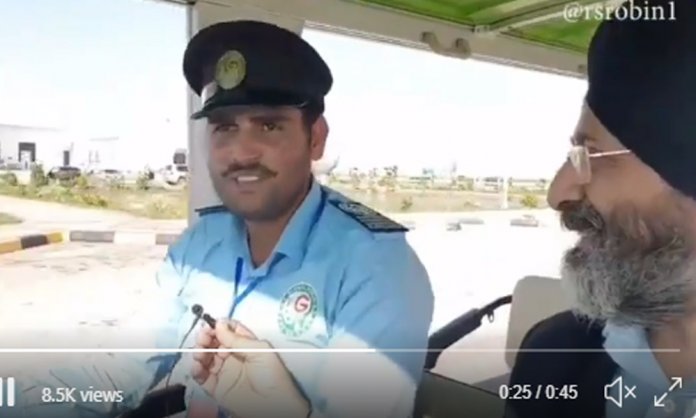 The way Prime Minister Imran Khan has accommodated the Sikh pilgrims by opening the Kartarpur Corridor for them and facilitating them with visas has won many hearts.

Khan has been praised and lauded both locally and internationally, so much so that posters of him were put up in Amritsar to celebrate his gesture of kindness.

Lately, one of the most charming Pakistani actors, Ahad Raza Mir took to his Twitter account to start a search for a very special driver. The driver, Saddam Hassan, was escorting Sikh pilgrims to Kartarpur, and an Indian journalist decided to record him.

Since then, his warm and welcoming attitude is making him go viral over the web.

Hassan is being hailed as a hero and ambassador of peace for welcoming the pilgrims from across the border so beautifully with open arms.

Take a look at what Ahad said:

“This is what every Pakistani feels and stands for: Compassion, humanity and peace,”

“Can anyone help me get Saddam’s contact details? Want to meet and thank him for being such a good ambassador of our country.”

This is what every Pakistani feels and stands for: Compassion, humanity and peace. Saddam Hassan really sums up the fact that Pakistan welcomes everyone. Can anyone help me get Saddam's contact details? Want to meet and thank him for being such a good ambassador of our country. pic.twitter.com/7rvYzU1C2f

The Indian journalist, named Ravinder Singh, has a huge smile on his face as he records the video and asks Hassan how he’s feeling about the Pakistani government’s gesture.

Here’s what Hassan says in response:

“I don’t think you are as happy as me,” Hussain replied smiling, “The way my eyes have welled up with tears. I am very happy.”

“Seeing you all, I have that feeling that one has when one go for Hajj. This is the same experience for you,”

In a world so full of hatred and discrimination, stories like this really make us feel like there is some hope for humanity left.

We hope Ahad can get hold of the kind young man and thank him the way he’s been wanting to.

Salary Trend Report: Salaries Across Pakistan Expected to Decrease in 2020

Let us know your thoughts in the comments! Stay tuned to Brandsynario for more news and updates.