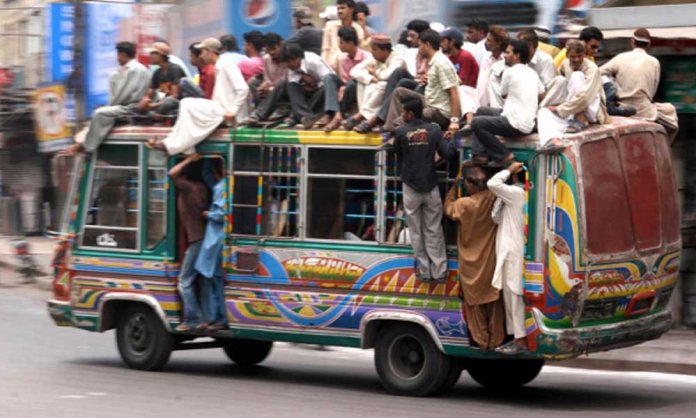 The transporters association in Karachi, on Sunday, increased the prices for bus fares, minibusses, and coaches by 100%.

The price of public transport fares comes after the increase in fuel prices, triggering a butterfly effect.

Given that there is already inflation in the country, the lower to the middle bracket is now facing anxiety.

A leader of the main transporters’ body informed Dawn that the transporters would observe strike on July 10 in the city to pressurize the provincial government to increase fares.

According to one of the passengers, the route number 11-C bus has increased the fare from Safoora Chowk to Saddar from Rs. 20 to Rs. 40.

The passenger further shared that when the public asked the conductors to present the official notice of fare increase, they were unable to provide any official document.

Instead, the passengers were shown a letter made and printed by the Bus Owners Association of Karachi.

Those passengers who raised their voices or refused to pay more were told that they can exit the vehicle if they are not willing to comply.

On the other hand, Mohammed Salman told Dawn that the minibus of route W-11 had increased fare from Liaquatabad to Tower from Rs20 to Rs30.

Passengers further complaint bus conductors and drivers over-fill their vehicles with travelers just to earn more money, which put the safety of all passengers at high-risk.

Mohammed Azam, who travels from Gulshan-i-Hadeed to Saddar on a daily basis, told Dawn that Muslim coach’s fare was Rs30 for travel between the two places, but it had recently stopped plying on full route. Instead, the coach drivers stop the vehicle at Quaidabad from where another coach charges Rs20 for onward journey to Gulshan-i-Hadeed.