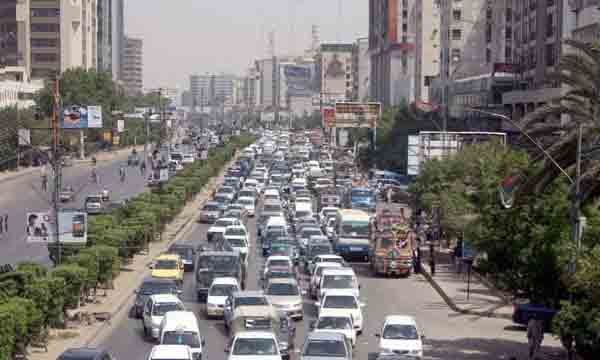 Update: Users on social media have taken it to different platforms for those who are stuck or traveling.

Accordingly, Shahrah e Faisal to Karsaz is cleared of traffic.

Shahrae Faisal is not blocked at all. It’s clear with a little less than usual traffic. Perfectly safe to commute. #HalaatUpdate #Karachi #AasiaBibi pic.twitter.com/rcOMxhhHVJ

Gulistan-e-Johar and Dalmia are also cleared as well.

Just came home from korangi-baloch-sharae faisal-dalmia to johar. The roads are clear. Not even a sign of burnt tyres #Karachi

Click on the map and turn ‘live traffic’ feature ON to see live updates.

Unrest across the metropolis has arisen as the verdict of Aasia Bibi’s case has upset sentiments of Tehreek-e-Labbaik (TLP) workers and their leader Khadim Hussain Rizvi.

Earlier, in a video message, Khadim Rizvi had addressed to the public that if the verdict was to upset their sentiments, they will not be quiet and will be out and about protesting the decision.

Concerned citizens took it to social media to update others about the condition of the city.

Khadim Rizvi and Protestors in Lahore Outside Punjab Assembly

Unrest by religious groups has also kickstarted in Faizabad

The twin cities (Islamabad/Rwlpindi) coming under the zombie siege going to paralyse life fr unknown period.I took these pics while walking thru those zombies who were bzy setting the scene @ Faizabad. pic.twitter.com/uHh1k5bP8I

I do not know thay if this is an authentic picture or not but someone on social media is claiming that TLP's logistical team has arrived on Faizabad Interchange and is distributing dandas. Can someone confirm or deny this? pic.twitter.com/q40drchY7Q

Tyres are being burnt at the protest at the Faizabad Interchange.

Owing to prevalent law and order situation, everyone is advised to please restrict their movement for the next few hours. Faizabad, Aabpara, Barakahu and Kashmir Highway are blocked by protesters. We have arranged for alternate routes and will be shared soon

Unregistered Mobile Phone Users to be Charged with Regulatory Duty

Those in #Karachi please see and take precaution! https://t.co/dLzsZfT8gt

Protests reported from Super Highway in #Karachi at Sohrab Goth. Traffic to and from Hyderabad blocked.

People stuck in traffic near Tower, State Bank, due to protest against acquittal of Aasia Masih #Karachi pic.twitter.com/vDT0i0T16I

#PakistanQuartersMy heart aches for residents of #PakistanQuarters, specialy for this man. May Allah guide us to right path. Ameen #TLP #KhadimRizvi pic.twitter.com/pXVU2mrxDN

Protests have been erupted across #Pakistan after SC’s ruling on #AsiaBibi
Why can’t these people let #Insaaniyat (humanity) prevail?
Even the God stand by the side of the oppressed, this mob protesting such gesture of justice & kindness are definitely the enemies of humanity! pic.twitter.com/N75LKqdHv5