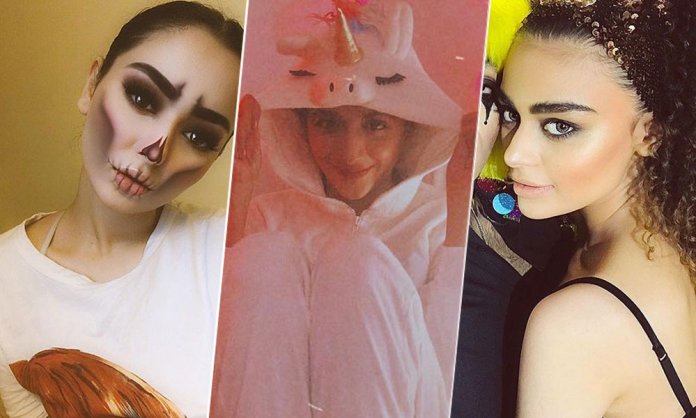 So, it was that time of the year when people celebrate the spookiest night of October, trying to execute their best possible Halloween look.

Where normal people got the chance to dress up as our favorite star or character, celebrities also tried their best to pull off their fantasy look this Halloween’18.

From downright frightening to some way too adorable get-ups, Pakistani celebrities were no less behind and celebrated the Halloween at its most. But only some of them were able to execute their scariest look right and others were not so Halloween like.

Here’s the list of the Best to Worst Halloween Look by Pakistani Celebrities!

When it comes to some not-so-mainstream stuff, you can always count on Hania Aamir to do it right. The diva went for a “Ghost Rider” makeover this Halloween and if it were not for the screen, she would have definitely scared her followers big time.

Halloween with my little prince. Heading out for trick or treating 🎊#NYC #Halloween #HSY #family @theworldofhsy

HSY went for an all fighter look from the famous Tom Cruise movie “Top Gun”, with Maverick and Goose name tags and absolutely nailed it. He celebrated the Halloween in New York with family and had one crazy night by the looks of his Instagram stories.

Sadaf Kanwal opted for a sassy gypsy look this Halloween but kept it rather simple. Her friend looks more creepy in this picture.

Ayesha Omar went for an all “Khoobsoorat” look even on Halloween. While she looks super hot in her skimpy dress, she once again faced some criticism from her followers due to her outfit.

We live in 2018 where the scarrriesttttt thing is to let go of our fear of the unknown/future & believe in a little Magic.. sooo here’s to spurring some magic & not giving a damn to logic. #IamaUnicorn #NewYearalmostHere 🦄 ✨✨

Even though her dress looks more of a sleeping wear than a Halloween costume, Mawra Hocane as the unicorn was one of the cutest looks.

Ali Kazmi dressed up as Captain Kirk for his Halloween look. But we think he failed to pull it off.

23 Best Horror Movies of All Time: A Must-Watch List for Halloween!

Who do you think wore it the best? Let us know in the comments below.