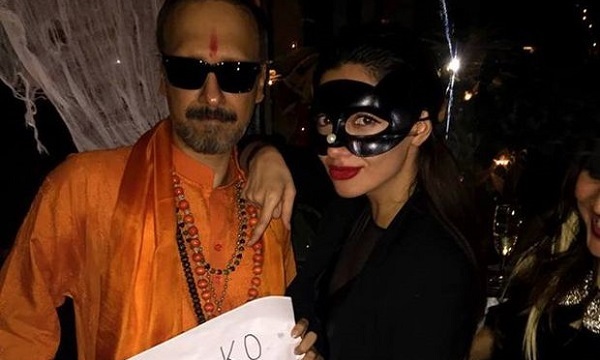 Pakistani actress Mahira Khan has apologized for hurting people’s sentiments over her Halloween image. The actress posed with director Asim Raza who mocked Shiv Sena at the Halloween party organized by hairstylist Nabila in Karachi a few days ago.

The lady was dressed as catwoman while the director and producer of ‘Ho Mann Jahaan’ were seen in Shiv Sena’s Bal Thackery avatar, holding a placard “Mahira ko bahar nikalo.” The actress was smiling in the picture while posing with him.

Mahira Khan Mocks Shiv Sena for Banning her in Bollywood!

The candid photograph received a huge backlash from Indian fans as soon as it surfaced online and sparked social media frenzy.

The 32-year-old actor took to Twitter to issue an apology and said the image has been misconstrued.

The image from a Halloween event I attended has been made out to be something it never was.

“The image from a Halloween event I attended has been made out to be something it never was. It was not done intentionally to hurt anybody’s sentiments, neither to make a political statement,” she tweeted.

It was not done intentionally to hurt anybody's sentiments, neither to make a political statement.

She added, “If I have hurt anyone’s sentiments with the image at the Halloween, I would like to apologize as that was not what I intended and was unintentional.”

As many have said before me, artists are creative people who can't be dragged into the politics of nations.

I have always made a concerted effort to maintain this standard for myself. Love and peace to all.

If I hv hurt anyone's sentiments w the image at the Halloween, I wd like to apologise as that was not what I intended & was unintentional

The Pakistani beauty like other artists from both sides of the border believes that art knows no boundaries and the artists should not be dragged in politics of the nations. She said she has always tried to maintain this standard for herself.

The controversial Halloween image appeared at the time when Pakistani stars are facing opposition from India’s extremist party Shiv Sena. The party has already imposed a ban on Fawad and Mahira for promoting in upcoming movies while their ire has forced the cancellation of Ghulam Ali’s concerts two times in a month.