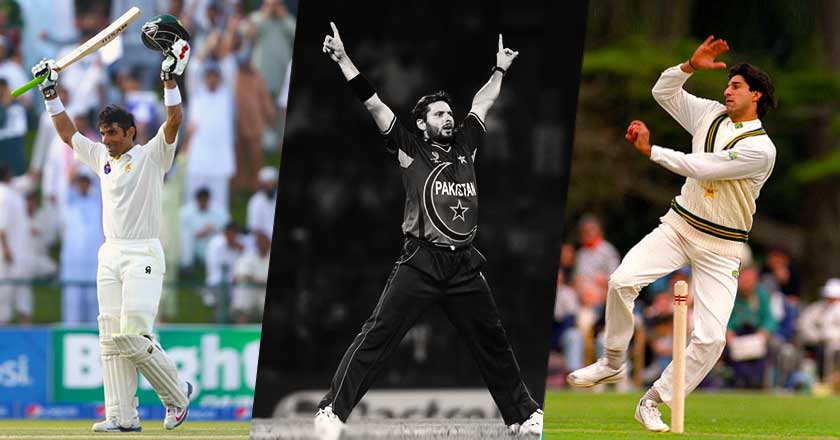 Pakistan is a cricket crazy nation and there is not doubt about it. The land, despite its numerous problems, has produced cricket talent like no other country.

Be it Afridi’s sky-high sixes or Akhtar’s lightning-speed ball, Pakistani cricketers have registered their outstanding achievements in worldwide cricket history to make sure the World remembers them with awe.

Some of the major world records Pakistani cricketers named to themselves are listed below:

King of swing, Wasim Akram is the only bowler to have achieved four hat-tricks in international cricket, most by any bowler in the world. The greatest fast bowler of all times has done this twice in ODIs against West Indies in 1989 at Sharjah, Australia in 1990 at the same venue and twice in two consecutive Test matches against Sri Lanka in 1999. Akram with 502 ODI wickets remained the highest wicket taker in ODIs for quite a long period till Muttiah Muralithran (534 wickets) registered this record to his name in 2009.

Boom Boom Afridi, one of the best hard-hitting batsmen cricket has ever seen, holds the record of hitting the most number of sixes, not only in ODIs (351) but also in overall international cricket (465*) including all three formats of the game. Shahid Afridi had also scored fastest century of ODIs (102 off just 37 balls) in his first innings back in 1996; this world record belonged to him for more than 17 years until 2013. Currently he is also the leading wicket-taker in T20 with 88 wickets to his name. 5. Mohammad Yousuf– Most Test Runs & Centuries in a Calendar Year

Mohammad Yousuf, Pakistan’s run-scoring machine of his time, is still on top of the game; scoring most test runs and most test centuries in a calendar year. The most successful test captain of the country with 20 victories, Misbah has led his team in most number of Test matches (15) after the age of 40, two test matches more than England’s WG Grace – who led in 13 Tests after crossing 40. The right handed medium-fast pace bowler who shone against the arch rivals, India is the youngest cricketers to take hat-tricks. Aaqib took a hat-trick in an ODI against India in October 1991, aged only 19 years and 81 days. He remains the youngest player to have taken an ODI hat-trick. He was a key member of the Pakistan team that won the 1992 Cricket World Cup. What’s more surprising is the fact that the second and third youngest cricketers also hail from Pakistan. They are: Mushtaq Muhammad – 15 yr 124 days and and Aqib Javed – 16 yr 189 days.