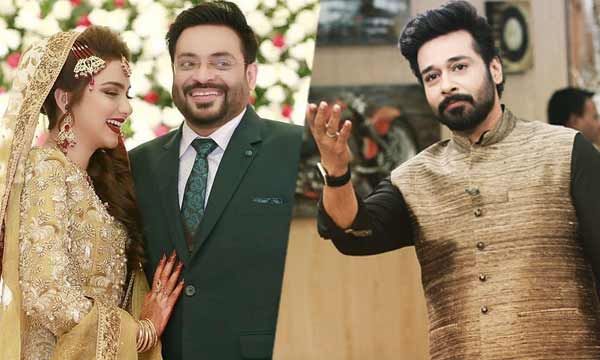 The PTI leader received severe backlash after a heart-wrenching tweet by his daughter from first marriage, Dua Aamir went viral on social media.

Dua’s post made it clear that her family has been devastated after her father’s second marriage.

Her confession caused a huge backlash for the newly-weds. Aamir Liaquat was accused of cheating on his first wife and Syeda Tuba Anwar blamed for breaking a home.

Following the criticism, Aamir Liaquat responded to haters and claimed media is making a fuss without about his second marriage by interfering in his private life.

He also exposed that people are being paid to spread hatred against him on Twitter.

The anchor also cleared that he still supports his first wife and children.

Amidst all the controversy, Aamir Liaquat’s second wife also broke her silence on the matter and stated:

Rumors & Gossip is Temporary,
Our Marriage is Permanent ❤️#Alhamdullilah

Famous Pakistani actor and popular host, Faysal Quraishi also give his two cents on the matter in his morning show ‘Salaam Zindagi’.

Watch his complete message below.

Appreciating the kind gesture, Aamir Liaquat sent his love to the star on Twitter.

Tuba also expressed her gratitude towards the actor.

Thanks a lot for your kind words @faysalquraishi Allah bless you 🙂 https://t.co/BMXZNu5cGk

Liaquat got married for the second time a few months back and recently had a delayed Valima. His second wife Tuba also works at Bol TV network and has also become the center of attention.

There is a reason why two people stay together. They give each other something nobody else can. ❤️👰🏻 We Tied The Knot. #OfficialPhotographs Together Forever 💞 #AamirLiaquat #TubaAamir #Newbeginnings #Newlywed #Wedding #Love #TubaAnwar #Married #TiedTheKnot

It is reported that Tooba and Aamir developed a strong camaraderie while working together. Meanwhile, the scholar’s first wife, Bushra remained unaware of the relationship.