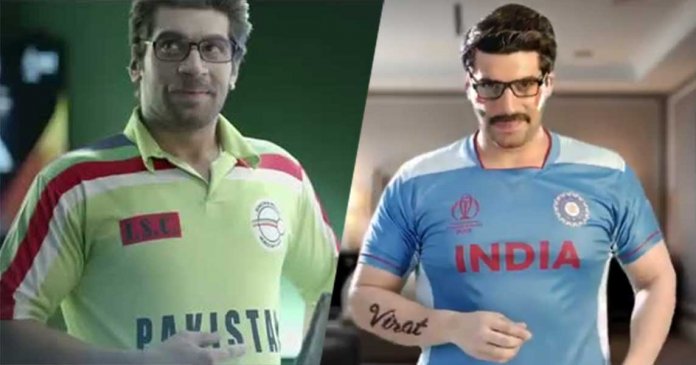 India is playing against England in a clash during the ICC World Cup 2019 in which their victory would also benefit Pakistan and Bangladesh to keep their dreams of making it to the top-four alive.

India has reserved its place in the final four, however, Pakistan with nine points and only one game to go need India’s win to keep them at 4th. A victory in their next game could see Pakistan through to the semis ahead of England with 11 points.

For the very reason, Pakistan seems to be cheering for India to win the match which is something that is really odd to observe!

Rewinding back to a couple of years ago, India had made a campaign with the name ‘Mauka Mauka’ that went viral. The campaign featured a Pakistani fan who had been waiting forever to see his team lift the trophy.

Now, the famous ‘Mauka Mauka’ man is back, and this time, he is cheering-on India in the latest CWC ad. The fan can be seen donning the Indian jersey and sporting a Virat (Kohli) tattoo on his arm.

Can the Men in Blue keep their neighbours’ ICC #CWC19 hopes alive?

Another video has gone viral on social media where an Indian fan was seen making fun of a Pakistani for cheering for India to win the match against England.

After a long Span of Time Pakistan will Support India against England in today’s Fixture.

India will Response as good as because india will have to win semis playing against Pakistan..

No one Can Unite Ind-Pak
CRICKET DID IT…… AGAIN N AGAIN.#MaukaMauka @shoaib100mph

After losing the toss to England, Virat Kohli said it’s rare that India is receiving so much support from across the border during a cricket match.

“Crunch result on the outside as well, so I’m sure the fans of the Pakistan team will be supporting us today which is quite a rare thing, yeah but we have to focus on what we need to do as a team.”

“So I want the whole of Pakistan to back India, on social media and when it comes to public news. Because we need England to be out of this tournament,” he said in a video on his YouTube channel.

Can the Men in Blue keep their neighbors’ ICC #CWC19 hopes alive? Or as rumored, they will forfeit the match deliberately?