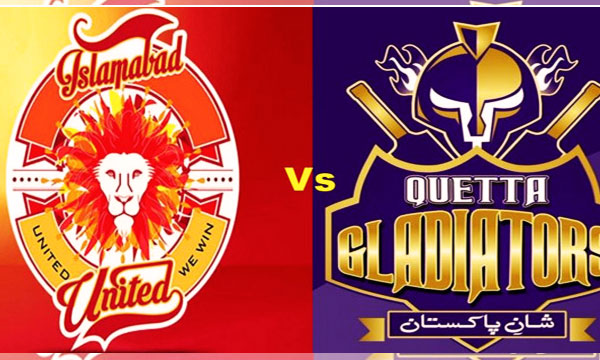 UPDATE: The final PSL 2016 showdown, the moment all the cricket fanatics were waiting for has arrived today! The match is expected to be a real clash of the titans. Yes, Islamabad United Vs Quetta Gladiators.  It did come as a shock to all when Peshawar Zalmi lost to Islamabad united in the 3rd playoff, forcing them to leave the league while Islamabad United made it to the PSL 2016 final.

Quetta Gladiators was the first team that qualified for the final while Islamabad Untied followed. It is interesting to know that the first and the last match are being played by the same teams. There are high expectations from the Ahmed Shehzad, Kevin Pietersen and Kumar Sangakkara tonight and the prediction is Quetta Gladiators will win! The team has a combination of match winning players, they have chased the highest total and defended 133 runs against Zalmi’s. The game plan and team strategy are much better!

Misbah, Andre Russel, and Sharjeel Khan will be the players to watch for from Islamabad United’s side. Even though Islamabad United has remained unbeaten in their last four matches and has a much higher moral and boosted mindset, Quetta Gladiators have played excellently in the entire league and truly deserve to lift the cup.

The inaugural Pakistan Super League T20 2016 has entered into the playoffs stage today and it’s only four matches away now when one of the four teams i.e. Peshawar Zalmi, Quetta Gladiators, Islamabad United and Karachi Kings will lift the PSL T20 2016 title.

Which team will be crowned as the champions is preconditioned to the best on-field performance and also good luck, I must say. So who do you think will win the PSL T20 title? Well, based on the analysis of the teams’ performances in the league, here is our set of predictions for the 4 playoffs’ winners and the final victory.

The 1st playoff was the nail-biting face-off between the two PSL 2016 giants Peshawar Zalmi and Quetta Gladiators, out of which Quetta Gladiators emerged as victorious and secured a place in the PSL T20 2016 final. It really was a tough equation to ask for as these two top sides are evenly talented, and performed equally well throughout the event, giving each other some truly tough time. It was a really close fight; Quetta Gladiators gave a target of 133, easily achievable by the ferocious Zalmi’s however, they eventually lost by 1 run.

Quetta Gladiators are now through to PSL final. Peshawar now play the winners of the play-off between Islamabad & Karachi #Cricket #HBLPSL

The winners have gone through to the finals directly making Quetta Gladiators the first finalist of PSL T20 2016 because they have shown more consistency in their performance and their bowling department is the strongest among all teams.

Mohammad Nawaz is the Man of the match.. What a fortunate turnaround for the young boy. PSL is already doing wonders. #HBLPSL #Playoffs

However, the Zalmis do have the ability to pull off strings in any stage and they will win over the winners of the 2nd playoffs (Islamabad United vs Karachi Kings) although it won’t be too easy.

Islamabad United has defeated Karachi Kings in both their encounters giving them a psychological edge over the Karachi Kings. However, this may not be the only reason of Islamabad’s victory in the 2nd play off, as I predict, Islamabad United is a better-performing unit on the field as compared to Karachi Kings, who despite fighting till the end, were unable to secure a competitive position in the league. Karachi team no doubt possesses T20 specialists but Shoaib Malik failed a winning combination, and thus their performance was below the mark. Ravi Bopara has now replaced Shoaib Malik as the team’s captain which might give an ege to them; however, Misbah and his side have the ability to tackle the toughest of situations and if Karachi Kings does not change their game plan, it would be an easy win for Islamabad United.

Who do you think will win the title? Let us know in the comments below: