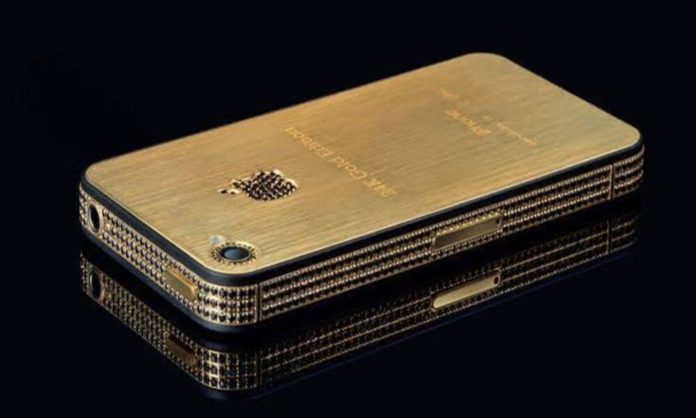 Every year as a new iPhone rolls out, we are in awe of the extremely hefty pricing. However, did you know that there are even more expensive phones that exist in the market? These luxury smartphones are not just electronic devices they are a statement of luxury, fashion, and quality. If you haven’t come across any take a look at some of the most expensive phones in the world.

Among the most expensive smartphones in the world is the iPhone 4 Diamond Rose Edition. Only two phones, each totally customized for its user, have been produced so far in order to maintain exclusivity. A total of 500 carats of diamonds are set in the phone, which is made of solid rose gold and costs a whopping $8 million.

Renowned luxury phone company Vertu was once a division of Nokia and is also the manufacturer of Signature Cobra. The phone was designed by French jewelry designer, Boucheron. It is, however, limited to 8 pieces across the globe and each piece has been assembled by hand for an extra artisanal touch in the UK. The handset’s encircling jewel-encrusted cobra, made of pure gold, white diamonds, emeralds, and rubies, is the most eye-catching feature of the gold-plated body.

Read More: Why Are People Complaining About Apple Airpods Pro 2?

Another smartphone that comes with a hefty price is Goldvish Revolution created by the Swedish business Goldvish. The majority of the body of the phone is made up of 18 carats of pink and white gold and 29 carats of diamonds rated VVS-1. The lithium-ion battery in the Goldvish Revolution features a 2.2-inch screen. English, Arabic, Russian, French, Spanish, Italian, German, Turkish, Vietnamese, and Portuguese are just a few of the languages that users may choose between.

The one-of-a-kind phone is made from a mix of gold and black diamonds totaling 45.5 carats. The phone’s stunning back panel is made of wood from a 200-year-old African tree, and the keys contain 17 manually polished, laser-etched sapphires. There were only three of these phones ever produced, and each one has a special number carved on the wood panelling so you can be sure you have a one-of-a-kind item.

At number 5 comes another most expensive phone in the world- the Goldvish Le Million. The phone is manufactured by the renowned luxury brand Goldvish. The stunning, pricey, diamond phone was built in 2006 and was the most exclusive and costliest phone in the world at the time of its launch which made it eligible to get a spot in the Guinness Book of Records.

What makes the phone so expensive are the 50 diamonds embedded in it, including 10 precious blue diamonds, which are extremely uncommon. The minimal quantity of Macassar Ebony that is visible on the phone’s sides is there for aesthetic purposes alone. Along with the phone’s extremely opulent design, the software it runs on has been created to incorporate a unique encryption mechanism to protect the owner’s private data.

The Gold Striker features a single-cut diamond for a home button, but this one is a massive 7.1 carats, comparable to the King’s Button. The phone was another great invention by Stuart Hughes, weighing 270 grams and is composed of 22-karat gold. A total of 136 diamonds are set into the iPhone’s bezel, and 53 diamonds are in the Apple logo on the back of the device.

The Kings Button on the iPhone 3G is solid 18-carat gold, available in yellow, white, and rose gold. It is one of the top ten most expensive phones in the world. The phone’s circular body is covered with a sparkling pattern made up of 138 brilliant-cut diamonds. Additionally, it has a 6.6-carat diamond in its home button, which draws much attention to the phone.

The Falcon Supernova iPhone 6 Pink Diamond Edition retails for an astounding $48.5 million making it the most expensive phone in the world. The phone is a customized iPhone 6 that was first released in 2004. Its back is embellished with one enormous pink diamond and is coated in twenty-four-carat gold.

Read More: Samsung To Introduce ‘Galaxy Ring’? Here’s What You Need To Know