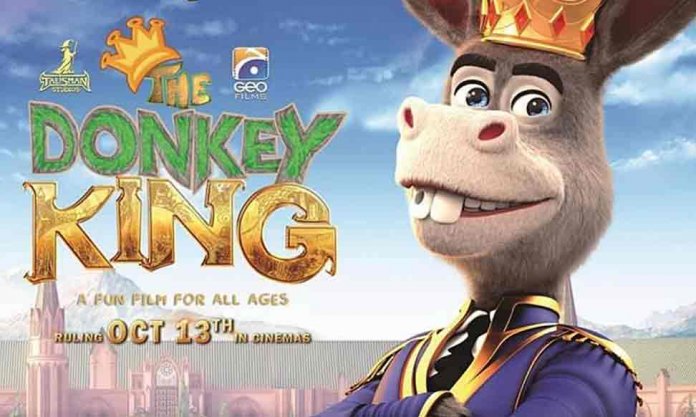 The much-anticipated animated movie of Pakistan, The Donkey King is finally releasing and it promises to be a fun-filled adventurous ride for the whole family.

The Donkey King features the voices of so many famous names including Ghulam Mohiuddin, Hina Dilpazeer, Ismail Tara, Javed Sheikh, Jan Rambo, and many others.

👑Donkey King👑 Upcoming Pakistani animated movie which is “made for all ages”. The way it’s showing a lion 🦁is giving up and some fox decided to gives charge of kingdom to a donkey 🐴for her own benefits and makes him king. . . The movie looks like depicting Pakistan’s political situation, said by many. Film is by Geo films and channel is clearly against new government. I don’t want to say my own opinion about anything political so I reserve my comment on it but what I like the most is return of “Jaan Rambo” as “Jaan Mango”, the donkey which is quite pleasant. . . Looks like a good watch for animation lovers and I hope it has better dialogues than “Allahyaar” (dialogues in that movie were very disappointing). Waiting for it. ・・・ #donkeyking #pakistananimation #jangumangu #animatedmovie #thedonkeyking #pakistaniblogger #pakistanibloggers #pakistanimovie #love #entertainment #swag #picoftheday #instapic #pakistanipolitics #imrankhan #nawazsharif #army #pakistanicinema #geotv

The Donkey King is directed by Aziz Jindani, who is famous for his animated mini TV series Commander Safeguard, which became quite popular among kids.

The plot of Donkey King

In a town where all the animals live happily with each other, Badshah Khan (Lion) decides to give his throne away to a new king who would run their affairs.

As always, Miss Fitna (the Fox) wants to control the kingdom and schemes to make Mangu the King, who is a launderer and a super careless Donkey.

At first, Mangu will struggle to carry the burden of responsibilities and will have no idea what to do. But later when his citizens need him, he’ll do what needs to be done, taking care of those who plot against his kingdom!

10 Movies With Blatant Brand Placements That Were Too Much!

Watch the trailer of “The Donkey King” below!